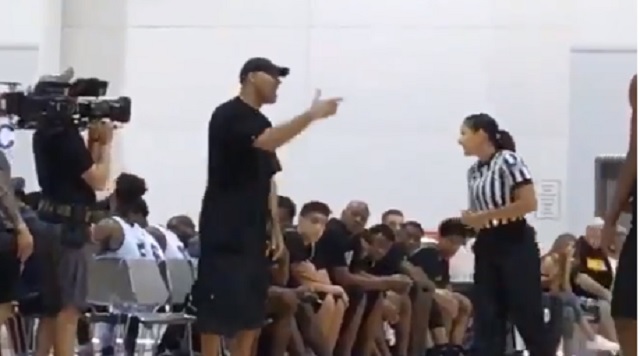 The company that supplied referees for the Adidas Uprising Summer Championships, in which LaVar Ball was able to have a female referee removed for giving him a technical foul on Friday, has announced that they will end their five-year relationship with the sneaker company due to the incident.

“The events that led to the removal of a female official on Friday are something that shall not and will not be accepted within the officiating community,” Court Club Elite, an organization that trains and develops referees at amateur and professional levels, said in its statement to ESPN. “Adidas and their leadership acted in a manner that does not parallel our views on integrity or professionalism, and neither should be compromised as they were in this situation. It was clear that the actions of the official in enforcing and addressing unsporting behavior were defendable and fitting of the behavior displayed; however, the agenda and lack of courage to do the right thing by Adidas leadership sent a clear message that the game and those chosen to protect the integrity were not of priority.”

Adidas has since apologized for the incident.

“The referee substitutions made during our tournament last week are not in line with our company values. It was the wrong decision. We regret the situation and are looking into the matter to make sure our standards for sportsmanship, equality and fair play are met in the future.

Supporting all athletes is critical to who we are. We believe in the power of sport to create positivity and bring people together. Importantly, any representation that we would compromise our values and inclusive approach for the benefit of any individual is inaccurate.”

It was reported over the weekend that the sneaker company was granting Ball’s requests during the tournament because they were interested in signing Lonzo to a shoe deal.

Not a good look for Adidas to bend over backwards for Ball while he’s removing female refs from games and telling them to “stay in their lane.”