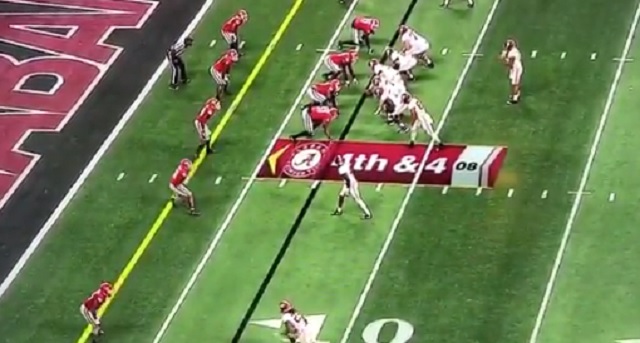 The Alabama Crimson Tide were able to come back by 10 points in the 4th quarter of the national championship to tie the game but not without some controversy.

On Alabama’s game-tying touchdown on 4th down it appeared that Bama wide receiver Najee Harris crossed the line of scrimmage before the ball was snapped in the Tide’s game-tying touchdown play in the fourth quarter. Tua Tagovailoa hit Calvin Ridley in the back of the end zone to tie the game at 20 on fourth-and-4, but Alabama shouldn’t have been allowed to get the play off due to the penalty.

Brutal job by Fowler and Herbstreit for not picking up this no-call false start penalty on tying TD. https://t.co/ehgg37nJbT

The Internet of course was pretty fucking pissed off at the blatant missed call by the refs in the biggest college football game of the season.

I’m happy they didn’t call it because it ended up way more fun, but kinda seemed like a false start on the WR at the bottom of the screen?

false start on 4th down on tying touchdown. guy was starting to run before even snapped. game is so questionable now in history. worse i have ever seen

Noticed this live and had no idea why it wasn't called. Clear false start https://t.co/6YlAy0XOQw

That false start is blatant and directly in front of an official. No excuse haha