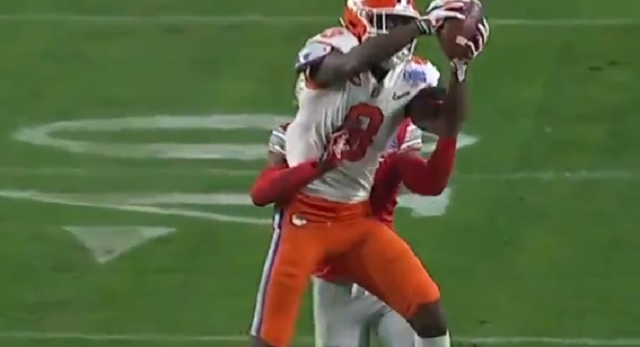 We have some controversy in the Fiesta Bowl between Ohio State and Clemson.

Late in the third quarter Clemson wide receiver Justyn Ross appeared to make a catch and then had the ball stripped away by Ohio State corner Jeffrey Okudah which led to an OSU touchdown. Refs took a look at the play and ruled that Ross didn’t make a “football move” on the resulting in an incomplete pass.

This was originally called a catch and fumble return TD, but was overturned as an incomplete pass. #CFBPlayoff pic.twitter.com/3RxiGYTvCv

Fans were not happy with the call.

So you can catch, fight for yards, have it ripped out and it is incomplete…ok….. he took MULTIPLE steps

3 steps and a football move

You have to let that play stand pic.twitter.com/28YRA0FgSu

What a BS call!! How do you not see that as a catch and fumble?! Very obvious possession and “football” move to me. SMH.#FiestaBowl

“Football move” is a nonsense term, a made-up term, so old former refs can wear a suit and a tie and have a job on TV. https://t.co/JObotNfX2y

This was a catch, a football move, a strip, a fumble, a defensive touchdown, and a bullshit reversal by the refs.pic.twitter.com/PlS35wxf68

Takes four steps. How is that not a football move?