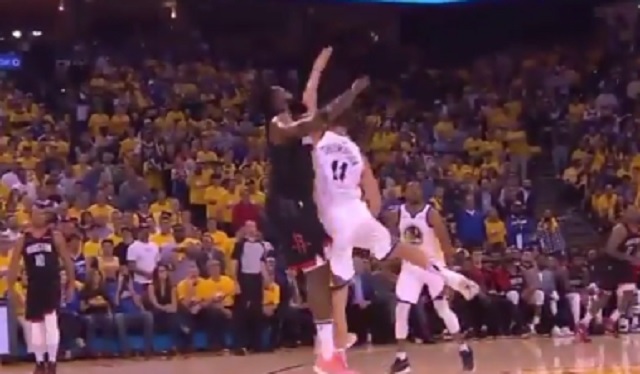 Game 1 of the Warriors-Rockets series is in the books and we already have plenty of controversy.

During the first game of the series refs seemed to side with the Warriors on several questionable calls when Warriors players would step under the Rockets shooters.

Going to be a long series for the Rockets if they're not going to call the step under on the Warriors pic.twitter.com/xULazrDL00

Draymond contested the shot and landed where he supposed to. Look at this lmao only one of them ended up in the wrong spade pic.twitter.com/R5P7nx8HZC

The Warriors went on to win the game but the Internet had a bit fun with the refs and delivered some hilarious memes after game 1.

What the refs get to see for the rest of this Warriors/Rockets series no matter which way the calls go: pic.twitter.com/KjhGpId5XU

refs when klay thompson barges into james harden and stomps on his ankles vs. refs when draymond green says "shit" out loud pic.twitter.com/vy6zXlIMFv

Refs after the game looking back to Steve Kerr before he goes into the locker room. pic.twitter.com/MU56Pl004M

smh this meme is so old but still relevant every post-season pic.twitter.com/gV9gOQ6ymn

Refs whenever a Rockets player gets fouled pic.twitter.com/SiB31t7TeR