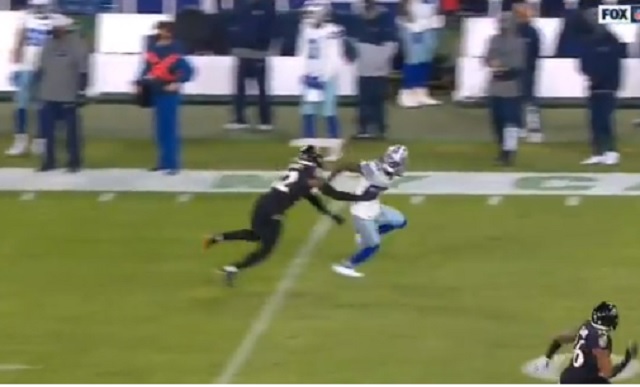 There was a bit of controversy in the first half of the Cowboys-Ravens game.

Late in the second quarter refs appeared to miss an obvious pass interference call on the Ravens after a defender clearly held onto Cowboys WR Ceedee Lamb on a play.

The Ravens were not called for Defensive PI on this play pic.twitter.com/geTFJ653Xe

How do the refs miss this call lmao pic.twitter.com/4jiqWMUa3A

Cowboys were clearly not happy with the missed call and went on to blast the refs.

@NFLOfficiating no call Bc it would benefit the Cowboys right? What bullshit, right in front of the ref. But if it was reversed, the flag would have been thrown #DallasCowboys https://t.co/sFeh3ZKzKr

You cannot tell me the refs are either a. Bad at their jobs , or b. Playing against the Cowboys Just flat out awful , super easy call to make. https://t.co/ikCVdWP1tO

Tell me these refs aren’t the worst in sports. The greatest sport in the world #NFL consistently has the worst officials in sports. I never say it fixed, but you better believe these punk asses are shaving pts weekly. The soft shit they call and not this?? @NFLOfficiating is 🗑 https://t.co/0SepL95BXX

Keep in mind: the refs just called Dallas on DPI the series prior, yet in that instance the ball was never really catchable – call it a “hold” but it wasn’t DPI.

And then the officials miss THIS? A clear hold, arguable DPI…. but No call? https://t.co/PwVUcRDhlK