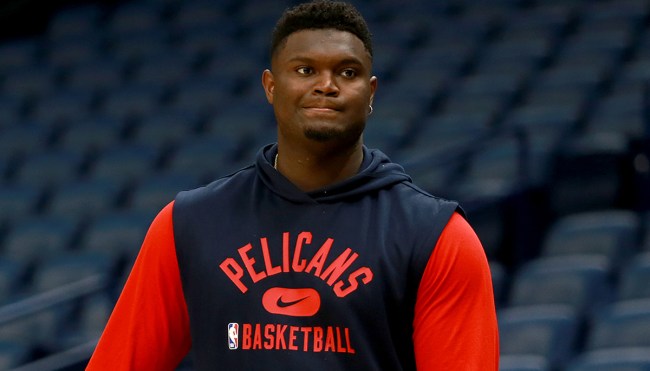 The New Orleans Pelicans find themselves in a tight battle with the top seeded Phoenix Suns in the opening round of the NBA Playoffs.

Through four games, the series is tied at two games apiece as the teams get ready to make their way back to Arizona for Game 5.

What’s most impressive about the series thus far is the fact that New Orleans has been able to keep pace with the NBA’s top team (at least by record) without the presence of one of their young stars.

The Pelicans have been without Zion Williamson as he continues to work his way back from a foot injury. He’s been seen warming up with the team but has remained on the sidelines this postseason as he’s not yet 100%.

Despite the absence, New Orleans has been able to land a pair of decisive wins while coming up four points short of being up 3-1 in the series.

Williamson could make his return to the floor at any moment.

He appears to be getting back that explosion that’s made him such a dangerous player in the past. Prior to Sunday’s 118-103 victory, the forward was seen throwing down a few impressive slam dunks as he warmed up with teammates.

While it was encouraging to see young star returning to form, it also caused some media members to question why he’s not out on the court helping his team.

Reggie Miller was on the call for Sunday’s matchup between the Pelicans and Suns. Midway through the contest, the broadcast aired some footage from the pregame warmups, which included Zion Williamson.

Williamson was seen throwing down a between-the-legs dunk while also working a bit on his jumper.

Zion getting some practice in before Game 4 💪 pic.twitter.com/hgsQj62eI1

The clip got Miller a little fired up with the fact that Williamson is still on the sidelines while his team is fighting for its season.

It does seem like that foot is close to 100%. Even if the team doesn’t want to throw him into the fire right away, he could possibly make some contributions coming off the bench.

Miller has been vocal on others in the league for missing time, most notably Ben Simmons.

This is becoming more of a norm in the NBA today, and it’s obvious that Miller doesn’t approve. You can bet he’d be on the court if given the opportunity.

We’ll see if Williamson is able to make his return before this first round of NBA Playoff action comes to a close.