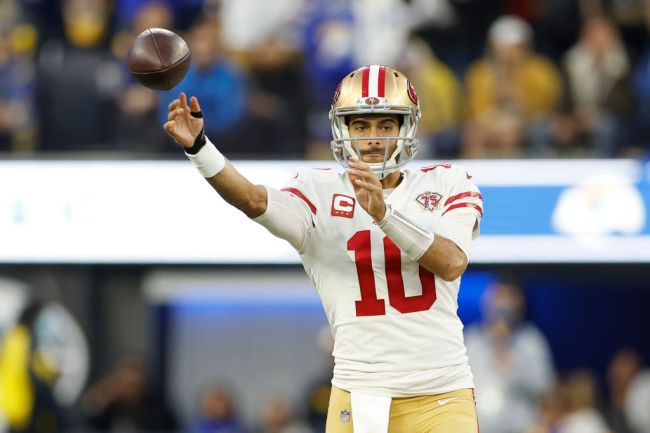 The football world has known for quite some time that Jimmy Garoppolo wouldn’t be starting for the San Francisco 49ers next season. Still, it was assumed that he would end up starting somewhere by the time the season got started.

Now, teams are already reporting for training camp and Garoppolo is still a member of the 49ers. For a while, his injured shoulder has been believed to be part of the reason why he has struggled to find a new home.

He was recently cleared to return to practice, but now he has a different issue. Garoppolo is running out of potential suitors.

When Baker Mayfield was traded to the Carolina Panthers last week, it eliminated one potential option for Garoppolo, but the Cleveland Browns were expected to have interest depending on the length of Deshaun Watson’s likely suspension.

#Browns still not expected to pursue Jimmy Garoppolo now that the #49ers have formally permitted him to seek a trade – even with uncertainty over Deshaun Watson https://t.co/Slgjb6BODo

With the Cleveland Browns no longer an option, it seems Garoppolo will only find a new home before the season starts if the 49ers cut him. The only team left that would make him their starting quarterback next season is the Seattle Seahawks and that kind of in-division trade seems unlikely.

Instead, Garoppolo may have to just hope he gets cut or that a team becomes interested during the season. There is always a chance that a starting QB could suffer an injury or could just play poorly enough that their team starts looking for an alternative.

For now, there just don’t seem to be options for Garoppolo to find a preseason trade.