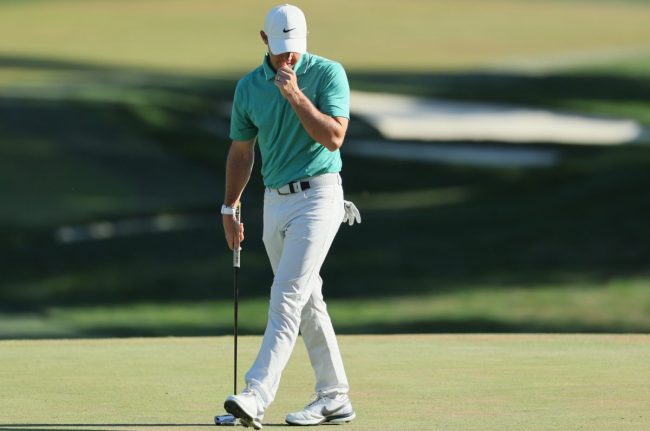 Rory McIlroy, who was walking the green at the time, was not having it.

McIlroy eyed the remote-controlled ball tracking towards the pin, but just as it came inches from falling into the cup, the golfer smacked it away with his putter. The fan tried for round two only to see his efforts thwarted by McIlroy once again.

He then became agitated, picking up the ball and firing it into a nearby pond. The crowd erupted as it splashed into the hazard area.

The spectator was identified and swiftly escorted from the crowd. Fans on social media were quick to react to the incident.

Many golf fans responded to seeing Rory Mcilroy chuck the remote-controlled ball into the water. Most believe the golfer took things a little too seriously.

Rory is not a fun guy

Why would you get annoyed with that? Don’t get it.

You just dropped a couple of notches with me Rory. Gezz have a little sense of humor. Scrooge of golf.

But then again, there is a lot of money on the line, and distractions like this shouldn’t be an issue.

This is the highest level of great golf with the best players in the world. There is no place for these distractions. I think @McIlroyRory is a great golfer and had every right to throw the ball in the pond. Fans are forgetting there is etiquette in golf.

Some said that this would never happen on the LIV Tour, which Rory has been in firm opposition of this PGA season.

This would never happen on the LIV TOUR 😂

It's hard to like a guy like Rory right now, LIV is living in that head rent free!

McIlroy wasn’t happy about the incident, and that was evident in his response. Despite the distraction, it looks like he’ll land a top 10 finish after closing the tournament at -9.