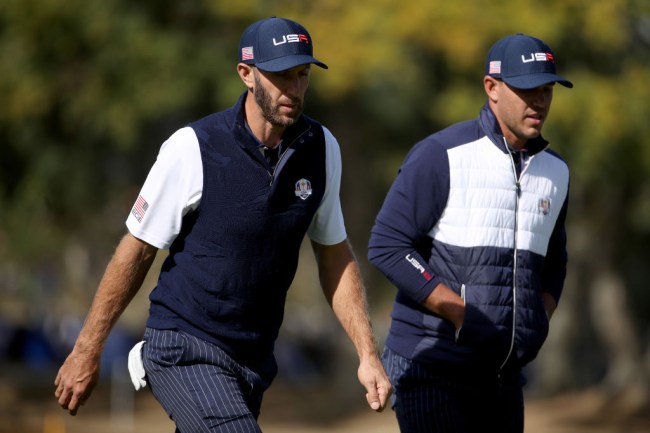 The United States Ryder Cup team seems to be imploding following an embarrassing weekend in Paris. In the aftermath of the loss, Patrick Reed tore into Jordan Spieth for not wanting to play with him, a USA team member called Reed ‘full of shit,’ and Brooks Koepka exploded a spectator’s eyeball (literally).

If you thought the reality show was going to slow down, boy are you mistaken.

On Monday night, The Telegraph reported that Dustin Johnson and Brooks Koepka were involved in a heated exchange in the European team room after the loss. Witnesses allegedly reported that the two top-ranked players, who partnered in the Saturday afternoon foursomes, nearly came to blows.

After the news broke, Golf Channel insider Tim Rosaforte confirmed that Johnson and Koepka had to be separated to prevent a fight.

The source of the friction was not known, and the dust-up was considered unusual because Johnson and Koepka appear to have a very close relationship. They often work out together at trainer Joey Diovisalvi’s Joey D Golf Performance Center in Jupiter, Fla.

Johnson’s fiancee, Paulina Gretzky, was reported to have been close by when the alleged incident happened. One of the European players’ wives also was a witness, according to The Telegraph, which also said that “an insider” reported that she was “clearly shocked and upset by the nastiness, which was very threatening.”

Although the genesis of the fight has yet to be determined, it could very well have been brewing even before the two golfers landed in Paris.  A report by Ben Cadiou in Le Equipe claims the two were involved in a dispute on the plane trip to the Ryder Cup.

Johnson and Koepka are very close friends, appearing on the cover of Golf magazine together and garnering the nickname the “Bash Brothers.” This could very well just have been a brotherly dust up after an embarrassing drubbing at the hands of the Europeans, but if it’s something more serious, we’ll sure as hell update you bros on it.