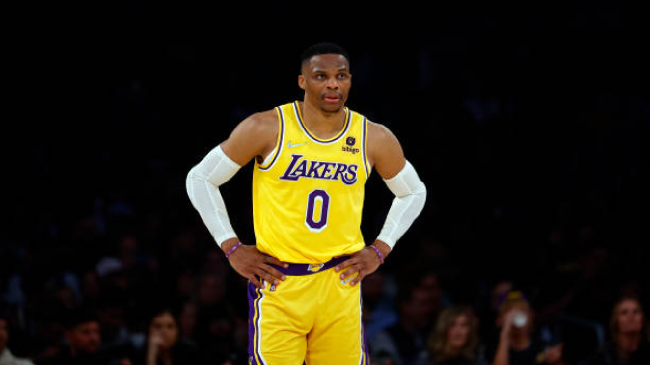 We are just over a month away from the start of the 2022-23 NBA season and to the surprise of many, Russell Westbrook remains a member of the Los Angeles Lakers.

At this point, just about everybody in the sports world knows about how disappointing his first season with the team was and the Lakers have been trying to get a deal done to move on from him throughout the offseason.

There were talks with the Nets to swap Westbrook and picks for Kyrie Irving. The Lakers tried to send him to the Pacers in a deal that would get them Buddy Hield and Myles Turner. The Lakers were apparently even involved in Donovan Mitchell trade talks.

None of it worked out. However, it was recently revealed that the Lakers remain in contact with the Utah Jazz about a potential deal for Westbrook.

Today, the Athletic’s Jovan Buha and Sam Amick revealed what the Lakers are looking to get in return from the Jazz.

Story on the Lakers' Russell Westbrook quandary looks at their long-term strategy here and why, as is explained, next summer matters so much, at @TheAthletic (w/ @jovanbuha)https://t.co/kiKrOilPF5

In recent conversations with the Jazz, the Lakers have targeted [Bojan] Bogdanović, Jordan Clarkson and Malik Beasley, according to league sources.

For the move to happen, the Lakers would obviously have to give up one of those 2 1st round draft picks they have available for trade.

This is a pretty big change of pace for the Lakers in their efforts to offload Russell Westbrook. They had been pursuing players who could strengthen their starting lineup and give them a bit more star power.

Of these 3, Bojan Bogdanovic is probably the only one who would crack the starting lineup. What this move would offer the Lakers is depth, which is something they didn’t have much of last season.

A strong bench could keep them in games while LeBron James is off the floor and should improve the team, even if it isn’t quite enough to consider them a contender again.

At least it would finally allow them to move on from the failed experiment of putting Westbrook, LeBron, and Anthony Davis on the floor together.