Rex Ryan Explains How The NFL Coaching Game Has Changed, Calls Josh Allen ‘Maybe The Best Athlete Of All Time In Playing The Position’ 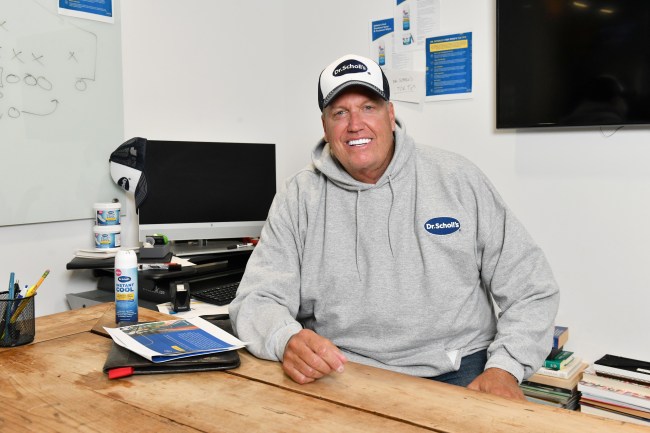 When you get Rex Ryan on the phone, you shut up and listen to what coach has to say.

Especially when he has stories to share about feet.

When the former NFL coach called me up the other day to talk about his cheeky new gig promoting Dr. Scholl’s s Instant Cool Athlete’s Treatment Spray and Wipes, he didn’t hold his excitement for the new football season back. With Week 1 in the books, Ryan – like all of us – was flabbergasted by the Bronco’s decision to kick a 64-yard field goal.

Even though Russell Wilson agreed with it… Yikes.

Below, Ryan details how much the NFL coaching pressure-cooker has changed in recent years since he’s left the league. And his enthusiasm for the up-and-coming generation of quarterbacks?

It’s an exciting time to be a football fan.

We have to talk about the beginning of the NFL season. We’re one week in. How much are you keeping abreast of the league these days?

Rex Ryan: Well, I watch every game, so I do a couple of shows for ESPN, Sunday Countdown. And then I do a show with Mike Greenberg called Get Up on Monday morning. I watch every single game and that’s kind of my job. I want to be prepared for it. I have a son that’s coaching, he’s been coaching in the league now for six years. And I still have my twin brother who coaches, but other than that, I wanna be on top of it. I don’t want to be one of these guys who just shows up and flies by the seat of his pants. I want to get into it, watch all the games and know what’s out there.

Quite honestly, man, we had some amazing games. Week one already we had some amazing games. But one of the strangest things I saw happened last night. Like here you have a minute left, you have three timeouts left and you have Russell Wilson, the guy you traded zillion players and draft picks for, and you decide to milk the clock down and attempt a field goal. I get that. What was it? Like a 30-yard field goal?

He told me a story about the time New England Patriots fans were heckling him about feet in a playoff game and someone asked him to rate his girlfriend’s feet. pic.twitter.com/O9uDQ1kCFu

Yeah. It was insane! The other thing that is insane is the guy had the distance for it. Like, “Oh, my God, he actually might have made it if it was online, it would’ve been close.” But, yeah, that was a crazy decision. And one, I’m sure, this is a rookie head coach, Nathaniel Hackett, and I’m sure he’ll be years later, “Oh, God, what was I thinking? I should have just let Russ put it in his hands and then milk it down, and get an easier field goal.”

None of us have a crystal ball, but what do you think the dominant coaching story is going to be for this season?

Well, I think it’s always Dallas… for whatever reason.

Mike McCarthy… Here’s the great thing, ‘We’re gonna give you a job, but you better win the Super Bowl.’ That’s his job security. It’s like Sean Payton’s already out there, everybody’s already saying not only is Mike McCarthy in the hot seat, but they’ve already named a replacement for him. It’s crazy, he’s a good football coach. He won 12 games last year, he’s won a Super Bowl as a coach, but yet he’s on the hot seat and all these types of things.

It’s crazy, but it almost seems like every year, a third of the head coaches get replaced.

You know what? I got fired being 500 with the Bills, I get fired my two years I’m there. And there was like up until last year when they started to have these great teams, there’s one player left on it. There, nobody left from those teams that I had, I’m like, “Alright.”

There’s an old saying… ‘No coach can win without good players.’ Some coaches can’t win with them, but no coach could win without them. So if you have good players, that’s a great thing. But I think right now, the way the game is, expectations are you better be really good. And if you have really good players, you better be good or you’re out. Coaches used to have a longer rope – you used to get like maybe four years, and then they’d see how you’re doing or whatever.

Now, not the case. You can be fired after one year.

It’s going to be another amazing year of quarterback turmoil as well. Just look at Dak one game in. That’s one of the hardest jobs in the NFL. What other dominant storylines are you looking forward to unfolding this year?

I wanna see these young guys and I’m just a fan of football now, but all these young quarterbacks, man, like we always say, “Well, who’s gonna replace these guys, who’s the next guys down the line?”

Well, has there ever been a better group of quarterbacks than we have in the National Football League right now?

We got the old guard, we still have the old guys hanging in there. Aaron Rogers, Tom Brady, two of the best that have ever done it and then you got the middle-range guys – your Russell Wilsons. But then look at the young ones though, like Lamar Jackson. By the way, he’ll be 25, I think this year. What? 25 and he’s going on like year four or five, whatever. Joe Burrow, you’ve got Herbert. You’ve got…

Patrick Mahomes, by the way, and maybe the best athlete of all time in Josh Allen playing the position. And Tua Tagovailoa. Jalen Hurts, all these guys… It’s crazy how talented this group of quarterbacks is.

I’m glad I’m not coaching defense against these dudes.