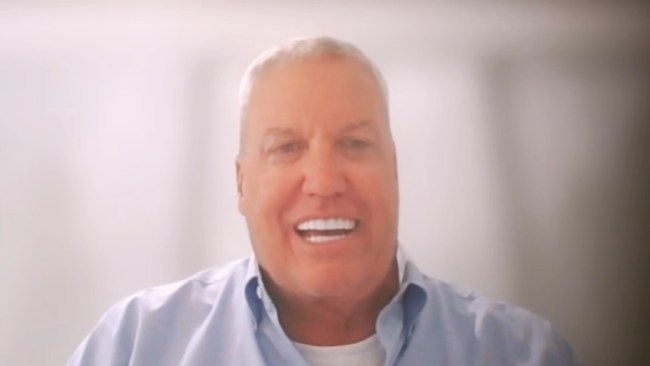 The joke goes back to 2010, when Deadspin surfaced a video of a woman who looked like Ryan’s wife making foot videos as the YouTube user “ihaveprettyfeet”. The videos were quickly deleted but still made the rounds. Head coach of the New York Jets at the time, Ryan claimed it was a “personal matter” after it caused a media hullabaloo (…in hindsight, not wrong!).

Since then, the former head football coach and analyst has owned it in stride, playing it up in various media appearances. In 2021, he joked on ESPN’s Get Up about Aaron Rodgers’ toe injury, claiming “listen, I’m a toe expert.” After sharing pics of his feet on Instagram a couple of weeks prior, Rodgers joked on Pat McAfee’s show that “I think Rex Ryan probably enjoyed it.”

In 2019, Sam Ponder lost it on Get Up when Rex Ryan quipped “let’s not talk about feet” during a spirited discussion on Antonio Brown’s frostbitten feet.

All things considered, Ryan has been pretty good-natured about the whole thing.

In a press release, Ryan explains: “Two things are for certain: I know football, and I know feet,” said Ryan. “But the stigma around talking about feet has always felt unnecessary. I’m excited to share my expert knowledge with these young Tarheels and help them step up their game – including tackling Athlete’s Foot with the help of Dr. Scholl’s.”

Ryan Ryan on being heckled by NFL fans about feet

I got a chance to talk to Ryan about the partnership and feet, along with the beginning of the NFL season. You can watch the full interview over on the BroBible YouTube channel. Meanwhile, one of the most amusing anecdotes from the 10-minute conversation comes from his days coaching the Buffalo Bills.

When the Bills headed to Foxboro for a game against the New England Patriots, Ryan was heckled mercilessly by fans in the stands about his propensity for feet.

One fan even asked him to rate his girlfriend’s feet. Here’s how he explained it to me:

Rex Ryan: Alright. So I’m going in New England and, man, every single one of these people, they got these little signs up and they’re all like holding these things up, and it’s something about feet, whatever it is. And we’re playing them in a playoff game, and I’m like, “Oh, God, look at this, man, it’s brutal.” But at the time somebody yells out, “Hey, Rex, what do you think of my girlfriend’s feet?” And I’m like, I can ignore it, play like I never heard him, or I could look back. I’m like, I look back and I go, “Man, they look pretty nice.” You know what I mean? [laughter] But, yeah, I just own it and it is what it is.

That is so funny. You got heckled but that’s okay. You owned it.

Oh, yeah. I’ve been called a lot worse, you know?

He told me a story about the time New England Patriots fans were heckling him about feet in a playoff game and someone asked him to rate his girlfriend’s feet. pic.twitter.com/O9uDQ1kCFu

Ryan Ryan on being a foot expert:

In the interview, I complimented Ryan on being such a good sport about the whole foot thing. He explained:

Absolutely. And you know why? It’s like, look, I’ve been married for 35 years and it’s like, “Okay, I’m [not] the only guy that is attracted… ” whatever.

My wife is, she’s gorgeous, and she has gorgeous feet, and I don’t care. That’s the truth and I’ll own it. That’s me. I tell you what’s crazy is, so I spent 30 years coaching and was a head coach in the NFL for eight years. And I think I’m more known for, “Hey, that’s that foot coach, that foot-fetish coach.” More than it is, “Hey, this guy, he was in the NFL for all this time,” and all that. But that’s cool when somebody says, “Aren’t you the guy that had the foot fetish, the coach?” I’m like, “That’s me. That’s me.”

Rex Ryan is national treasure and the football world needs as much of him as possible.

Watch the full interview below, on the BroBible YouTube: 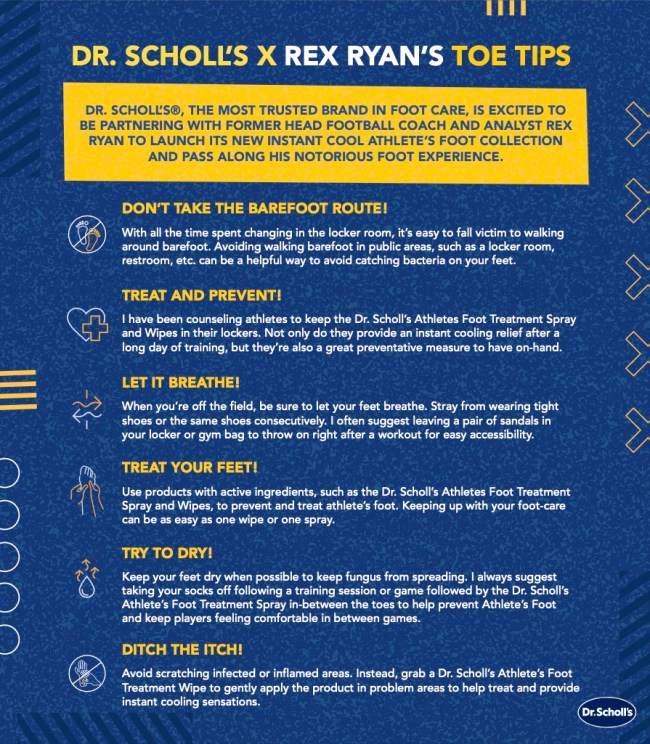