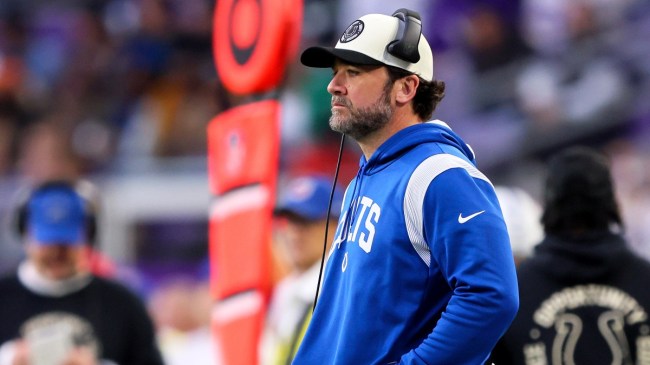 The Indianapolis Colts somehow lost after going up on the Minnesota Vikings 33-0 at halftime. It was the biggest comeback win in NFL history, which isn’t a great look for Indy.

This is now two total blunders with Jeff Saturday as the head coach. For that reason, Rex Ryan lit him and his team up for their poor efforts.

The former head coach went off on Saturday and the Colts during his morning segment on NFL on ESPN. Rex Ryan rips Jeff Saturday for failing to close the game out. On top of that, Ryan points back Week 14’s fourth-quarter blunder as well. Give it a listen below.

“This is one of our colleagues or whatever, but it’s terrible!” pic.twitter.com/e2JvJqdIlb

It’s a tough look for the Colts overall. Jim Irsay took a chance when he hired Saturday as the interim head coach. Although the team won in Jeff Saturday’s first game ever, it’s been a total disaster since then. It’s really not that crazy for Rex Ryan to go off on Indianapolis, as nothing is working out for that team right now.

For now, the future of this franchise is incredibly murky. Luckily, they still have some of their draft picks to bring in some talented rookies. However, the problems might be running deeper than just the roster. It’s unclear what Jeff Saturday’s outlook is, but the Colts might be searching for another new head coach this offseason.