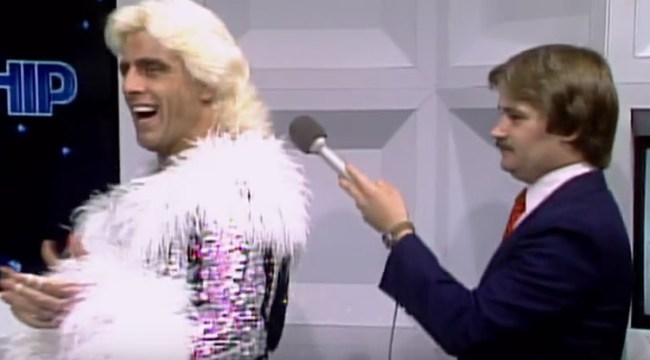 Assembling the pinnacle, the top, the Mount Rushmore of any endeavor isn’t easy. The task is especially tricky in sports.

At this point, opinion often clouds the actual facts and ranking is based on different attributes, intangibles, the generation, and anything that will give one athlete a leg up on another.

In this case, choosing the top wrestlers of all time is an unenvious task, especially when the question is posed to one of the greatest of all time – “The Nature Boy” Ric Flair.

Oh and he’s unable to include himself on the list.

WWE Hall of Famer Ric Flair made a recent appearance on Busted Open Radio where he talked about a wide range of topics.

During the interview, Flair has revealed who he believes to be the top three performers of all time.

So, the list is already suspected, since it’s missing one of the all-time greats. Flair did his best to answer.

“In his eyes, Steve Austin, The Undertaker, Hulk Hogan would be on that list. He would also talk about Austin’s appearance on Monday’s Raw where he moderated a contract signing between Seth Rollins and Braun Strowman.”

Who does the 🐐 think are the top 3 to ever do it?@HulkHogan @undertaker & last night’s master of ceremonies: @steveaustinBSR

All three men are wrestling legends, Hall of Famers, and changed the business in their own specific way.

I’m not sold on The Undertaker being in the top three.

He’s absolutely a top ten wrestler and sports entertainer with an amazing – and still semi-active – career. He also single-handily made a generation of kids cry and crap their pants after locking the Ultimate Warrior in a casket.

I just don’t think he’s top three, even with Flair omitted from the list.

Now you’re absolutely thinking, “ok, jackass, who should be on the list instead of The Undertaker?”

And the argument ends with this one simple fact – Sammartino held the world title two different times FOR OVER 11 YEARS.