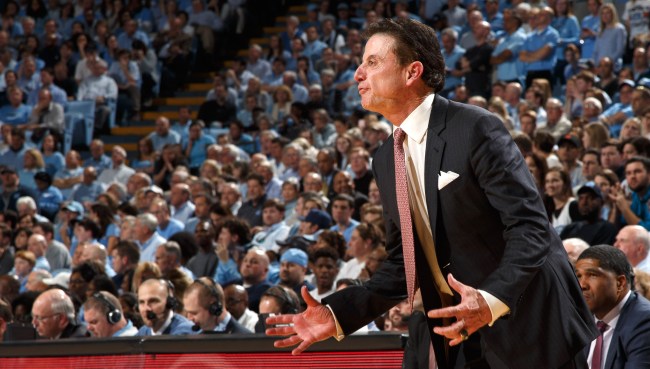 If you have watched the HBO documentary The Scheme about corruption in NCAA basketball then you are well aware that there is almost nothing that college basketball programs won’t do in order to get the top recruits in the nation to attend and play for their schools.

And if you have not watched The Scheme, then you also know there is almost nothing that college basketball programs won’t do in order to get the top recruits in the nation to attend and play for their schools.

That includes paying players, giving them gifts, no-show jobs, hiring their parents, buying them houses, and in the case of the University of Lousville under head coach Rick Pitino, hiring strippers and hookers to entertain during campus visits.

Pitino, who was forced to part ways with Lousiville in October of 2017 after an FBI probe alleged, among other things, adidas paid recruit Brian Bowen $100,000 to play for the university.

In October of 2018, Pitino made it known just a few weeks after saying he was “finished” coaching that he wanted back in the game.

On March 14, 2020, Pitino was named the head coach of the Iona College basketball program.

On May 4, 2020, the University of Louisville received a Notice of Allegations from the NCAA regarding the 2016-2017 and 2017-2018 men’s basketball program. Those would be the years Rick Pitino was the head coach there.

University of Louisville President Dr. Neeli Bendapudi and Director of Athletics Vince Tyra spoke to the media following the announcement on the school’s website which read, in part…

The allegations issued against the Louisville men’s basketball program include:

• A Level I allegation that an improper recruiting offer, and subsequent extra benefits to the family of an enrolled student athlete; and a recruiting inducement to a prospective student-athlete’s non-scholastic coach/trainer, were provided by certain individuals, purportedly identified and defined by the NCAA as “representatives of the university’s athletics interests,” none of whom had traditional connections to the University beyond their affiliation with Adidas or professional athlete management entities, as well as by a former assistant coach and a former associate head coach;

• A Level II allegation of recruiting violations by the same two former men’s basketball coaching staff members in providing impermissible transportation and having impermissible contact in the context of recruitment-related activities;

• A Level II allegation that the institution failed to adequately monitor the recruitment of an incoming, high-profile student-athlete;

• A Level II allegation that the former head men’s basketball coach did not satisfy his head coach responsibility when he failed to promote an atmosphere of compliance.

That last one there… yep, Pitino again.

Pitino and his new employer Iona College wasted no time trying to spin it.

“Today, the NCAA released an NOA and alleges a Level II violation against me,” wrote Pitino. “I firmly disagree with this allegation and will follow the protocols in addressing this allegation through the administrative process. Due to NCAA bylaws on public disclosure on enforcement issues, I will have no further comment on this matter until it is resolved.”

Iona and Rick Pitino have both released a statement regarding Louisville's Notice of Allegations from the NCAA. pic.twitter.com/3bLblDahRU

Of course he’s innocent of these new charges. Iona conducted “extensive due diligence” before they hired him. It’s all good!