Rick Pitino Angling For A New Coaching Gig Just Weeks After Saying He Was Done, Wants To Return To The NBA 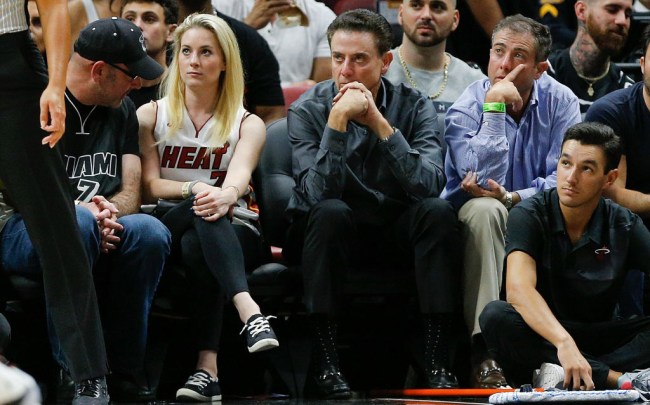 Welp, it’s been one year and 13 days now since the University of Louisville terminated Rick Pitino’s coaching contract. And it’s been just a couple of days less than that since Pitino sued adidas for causing him “embarrassment, humiliation and emotional distress.” So yeah, the time seems about right for him to start making a play for another coaching job, right?

As you may recall, Pitino was let go by Louisville after an FBI probe where he ended up being charged by the NCAA with failing to monitor the basketball program when former escort Katina Powell released a book called Breaking Cardinal Rules in 2015 which alleged that she was paid to have sex with Cardinals players, followed by recruits stating they were given sex and stripper parties during campus visits.

Now he wants to coach again, in the NBA… again.

“I just want to be a part of an organization,” Pitino told ESPN. “I want to develop young players. I want to be part of a team. I miss it terribly. I’m using this time to really study the NBA. If something opens up with a young basketball team, I’d have deep interest in it.

“I think the league is going to get younger and player development will become even more important to every organization. That’s my forte. I believe I can help an organization find a pathway to success.”

“I love the game. I still eat, sleep and drink it. I watch every minute of it. I watch your show. I can’t get enough of it. But I’m not going to coach again. It’s been too painful the last three years — the pain of a lifetime,” Pitino told Mike Greenberg.

Pitino has even hire super agent Drew Rosenhaus to represent him in his job search.

“I’m not looking for any of that [power/control] at this stage of my life,” Pitino explained ESPN. “I want to develop teams and develop players and build a winner. I value analytics. I want to fit into an organization. At this stage, that’s all I’m interested in.”

That’s pretty much the exact opposite of what he told Mike Greenberg in September when he said, “My days of putting on my gym shorts and trying to get people better are over.”