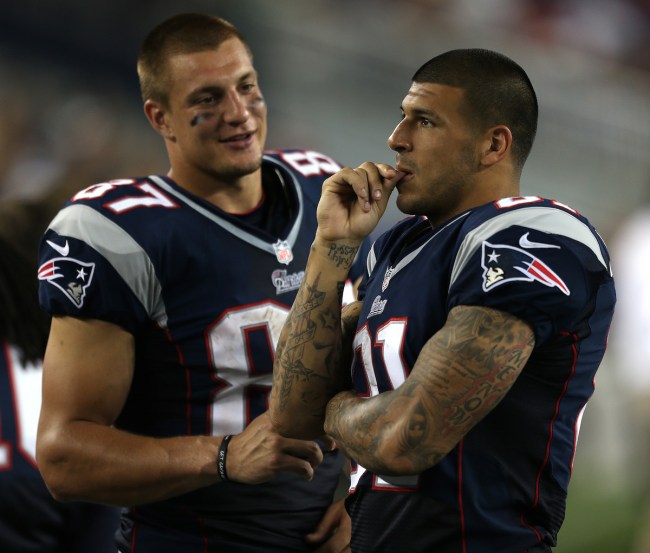 When Rob Gronkowski and Aaron Hernandez were teammates with the New England Patriots, the tight end tandem proved to be both dynamic and nearly unstoppable. With Gronk’s bullish style mixed with Hernandez’s finesse, the Pats reached the postseason in each of the three seasons they played together, with the 2011 NFL season — one in which New England reached the Super Bowl — proving to be the tandem’s best together, with Gronk hauling in 90 catches for 1,327 yards and 17 touchdowns, and Hernandez catching 79 balls for 910 yards and seven touchdowns.

What looked like a dynamic tight end duo on the gridiron for the next decade quickly took a bizarre twist. During the 2013 NFL offseason, Aaron Hernandez was arrested and charged with murdering a man named Odin Lloyd, which immediately led to the Patriots releasing the tight end. He was eventually found guilty of first-degree murder and was sentenced to life in prison without parole. Sadly, he took his own life while in prison in 2017, leaving a suicide note which only led to numerous rumors about his life.

Although the Hernandez incident occurred eight years ago, Rob Gronkowski has always seemed to avoid talking about how the situation impacted him. After all, the two were budding stars in the league together, and were around the same age. Gronk even once stormed out of a CBS interview in 2013 when pressed about Hernandez.

On Thursday, the four-time Super Bowl champion decided to open up a little bit about how he felt following the sad story of Aaron Hernandez’s life. Talking to The Ringer’s Kyle Brandt, Gronk described how “shook” he was from the events, and, like everyone else, tried to make sense of what happened.

“Aaron was a great football player. I get questions like that all the time about him and with everything going on, I was definitely shook when I heard that, when I heard everything about it because just being his teammate … you really don’t really see that. You’re not really looking into players like that’s who they are or that’s what they’re doing. I just try to keep it simple and light. He was a great football player but that doesn’t mean anything. You learn from other people, too.”

It’s a reminder here from Gronk just how delicate professional athletes are, and how it’s important to remember that they’re human beings in addition to being superior athletes. We all see these guys as gladiators who have an athletic ability that most of us could never imagine having, but that doesn’t mean they don’t have tons of issues going on like we all do. In Aaron Hernandez’s situation, Rob Gronkowski admitted that he knew nothing, and that news about his former teammate shook him like it did the rest of the world. Imagine the difficulty of dealing with something like that — where you feel like you never knew a person.

Overall, kudos to Gronk for answering honestly about his former teammate, no matter how difficult it might have been. Nobody can prepare another person for how to react to Hernandez’s actions, so it’s no surprise that the tight end regularly skipped over questions relating to his former New England Patriots teammate.

You can see the entire Rob Gronkowski-Kyle Brandt interview below.