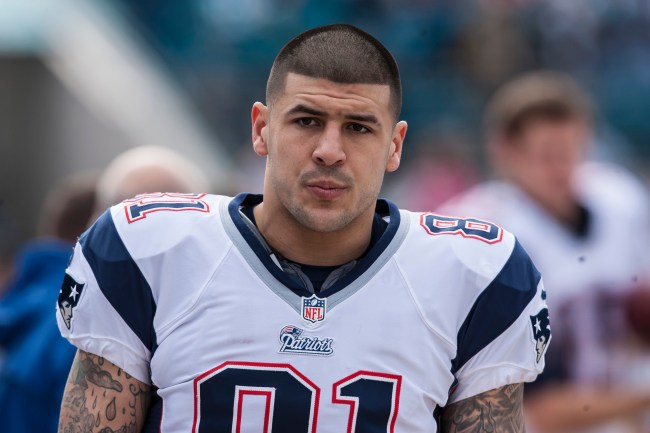 The NFL is league fueled primarily by excessive amounts of testosterone and is naturally filled with some of the most intense guys on the planet who take joy in inflicting a ton of damage on other human beings.

Consequently, the league has been home to some particularly unhinged players but I’d argue none of them come close to being as terrifying as Aaron Hernandez, whose on-field behavior was ever-so-slightly overshadowed by some incidents that took place off of it.

As you probably know, Hernandez was sentenced to life in prison after being convicted of first-degree murder (he was also charged with double-murder in another case but was ultimately acquitted).

Hernandez eventually committed suicide while serving his time, and since then, stories have emerged detailing some retroactively terrifying incidents— like the time he “jokingly” threatened to kill Ian Rapaport.

Hernandez’s lawyer has gone on record saying the Patriots could have taken steps to prevent the player’s crimes, which some people have partially credited to the severe CTE he suffered from as a result of his football career.

Dr. Ann McKee speaks at the second annual #CTE conference held by BU, @BUmemoryloss and @VABostonHC on the pathological findings of the brain of #AaronHernandez pic.twitter.com/425qnc293x

It seems like a bit of a stretch to say the team could have prevented a murder from occurring, but according to a report by The Boston Globe, there were at least a few warning signs based on testimony from Hernandez’s former teammates.

The outlet spoke to a number of ex-Patriots and had them share stories that highlight how seemingly unstable their former teammate was— including Brandon Lloyd, who said Hernandez was prone to some major mood swings:

“There would be swings where he’d be the most hyper-masculine, aggressive individual in the room, where he’d be ready to fight somebody in fits of rage.

Or he’d be the most sensitive person in the room, talking about cuddling with his mother. Or he’d ask me, ‘Do you think I’m good enough to play?”

It was like he went from this child-like, laughing, disruptive behavior,” Lloyd said, “and he storms off in a fit of rage.”

He also revealed Tom Brady did not put up with the tight end’s erratic behavior:

“(Hernandez) was out at the walk-through in flip-flops trying to run around.

He was laughing. He was loud. And Tom keeps it serious in the walk-through. And Tom says, ‘Shut the f— up. Get the f— out of here.”’

ESPN rounded up some of the more terrifying moments including an incident involving Dane Fletcher:

Fletcher told The Globe that one day Hernandez confronted him in the locker room, laughing at him “like the Joker in Batman” and reminding Fletcher how much he disliked him.

Fletcher also said many of his teammates were concerned by Hernandez’s choice of friends, many of whom were ex-convicts.

Hmmm. Maybe the Patriots critics are onto something.