Rob Gronkowski Explains Why He Was ‘Happy’ Being Suspended In 2017, Losing A $300k Game Check 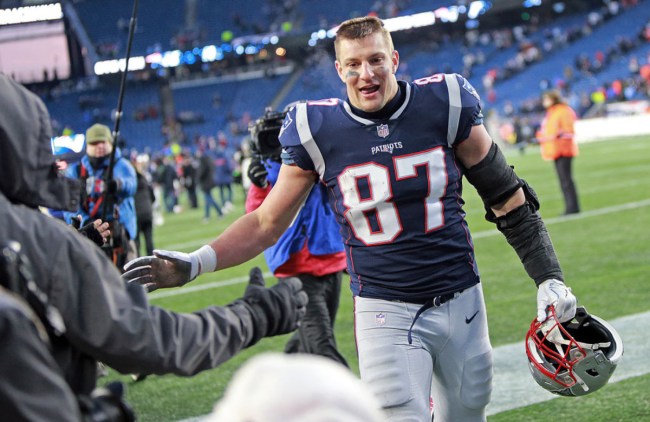 Rob Gronkowski is different, in a good way. He’s both a unique character and unique in his abilities as a tight end. The fact that he was legitimately happy after being suspended during the 2017 season just adds to Gronk truly being one of a kind.

During the 2017 season, Gronk was suspended a full week after a late hit. Every other player in the NFL would be disappointed after being suspended, but not Gronk, he was thrilled.

“I just got suspended a week. I was happy, I was finally happy,” Gronkowski admitted on Tuesday’s episode of ‘Man in the Arena.’ “I was like, ‘Yes, I’m away from football for a week. I get to recover my body.’”

“I lost a game check and it was about $300,000 that game check, and I didn’t even care one bit,” Gronk continued. “I was just glad I had a week off from football because I needed it.”

Things Were ‘Eerie’ With The 2017 Patriots

Gronkowski went on to explain that the atmosphere with that 2017 Patriots teem was “eerie” and the season was “taking a toll on him.” So, it only made sense that he was actually happy to get a week-long break.

Not many current or even former NFL players would admit they were happy getting suspended, but that’s just Gronk being Gronk.

Tom Brady explained that during that particular season, Gronkowski was being called for a lot of penalties. Even his New England teammates were getting on to Gronk for picking up so many flags.

“Our own team started getting on Gronk for that and Gronk was like, ‘I’m just trying to play ball,’” Brady said.

The Patriots ended up losing to the Eagles in the Super Bowl that season but picked up yet another ring the following year.