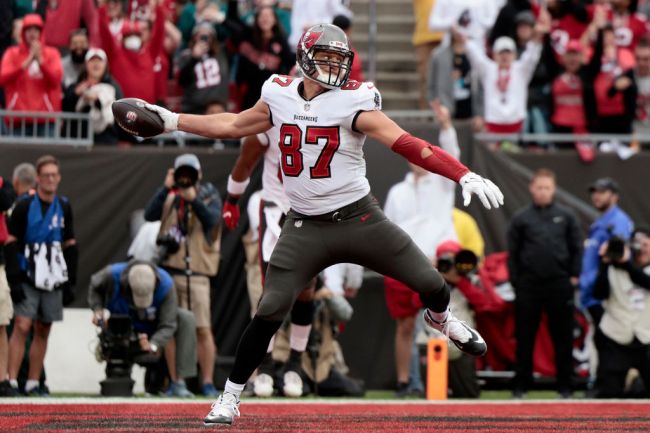 The NFL world was hit with yet another piece of shocking news this week. Bruce Arians surprisingly announced his retirement and the Bucs quickly promoted Todd Bowles into his position.

In the aftermath of Arians’ decision, we have heard from many around the football world, including members of the Tampa Bay Buccaneers. Today, Rob Gronkowski had a message for his former coach after his retirement announcement.

Thanks for the last 2 great years Coach, hopefully they let you keep riding around in your cart always keeping it real 🏴‍☠️ 👊 @BruceArians pic.twitter.com/1d2o5jo5lr

It was a very successful couple of years with Arians for Gronk. In his first year with the Bucs, Gronk came back from a year-long retirement and seemingly didn’t miss a beat. He posted 623 yards and 7 touchdowns on 45 catches en route to winning the 4th Super Bowl of his career.

He followed it up with an even better individual campaign in 2021. Gronk made 55 catches this past season and his 802 yards were good for 7th among tight ends. His 6 touchdowns also tied him for 7th in the NFL.

Arians’ time as head coach of the Buccaneers was a massive success. After a 7-9 first year, Tom Brady and Gronk came to town and helped Arians turn things around. The team went 11-5 in that second year and Arians won his first Super Bowl as a head coach.

In his third year, they went 13-4 and won the AFC South, but fell short in the NFC Divisional Round, losing on a last-second field goal to the Rams after Tom Brady led them on a huge comeback.

Now Buccaneers fans will just be waiting to see if Rob Gronkowski joins his former coach in retirement.