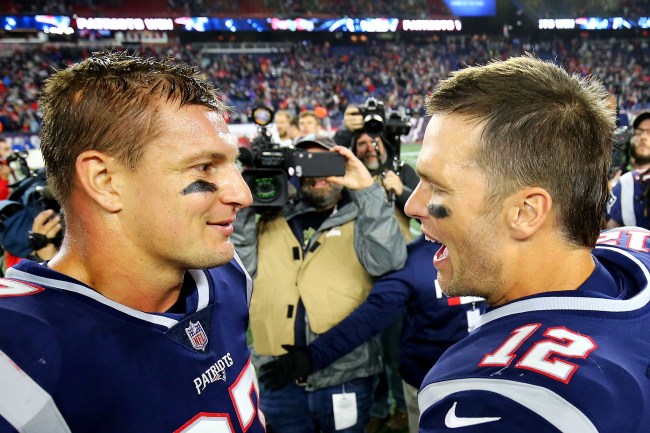 Rob Gronkowski’s 2018 regular season stats: 47 receptions for 682 yards and three touchdowns. This was a down year for a tight end who last year eclipsed 1,000 receiving yards and 8 score and in 2011 racked up over 1,300 yards and 17 touchdowns. Gronkowski’s role in Jeff McDaniels’ offense has become less glamorous this year, using the 6’6” specimen as a blocking weapon, a part of Gronk’s game that has always been supremely underrated.

Throughout Gronk’s nearly decade-long NFL career, the dude has never publicly pouted about his role, his targets, his teammates, his Sith Lord coach. In the industry, we call a guy of his character a “consummate professional.”

During a press conference on Thursday, Gronkowski, in true Gronk fashion, did nothing but gush about his teammates–namely Thomas Brady.

“It’s a lot of fun. The guy is just so precise with everything. Just the way he is out on the field, the way he prepares, the way he goes into these games. You know every single time, you’re going to get the best out of him no matter what the situations are, and that’s what’s so great about playing with him.

“It makes football the best it can possibly be, because you know you’ve got a guy that knows basically every situation, and he’s going to put us in the best situations every single time he steps out on the field to put us with a chance to win, every game we play.”

Patriots safety Patrick Chung has played nearly every season of his career defending Gronk in practices, and is eternally grateful for how the matchup has improved his game.

“He has made me the player I am. I get to go against him every day for the last eight, nine years. So, he’s definitely made me better, period. So, I actually need to thank him. Personally, that’s how I feel about him.”