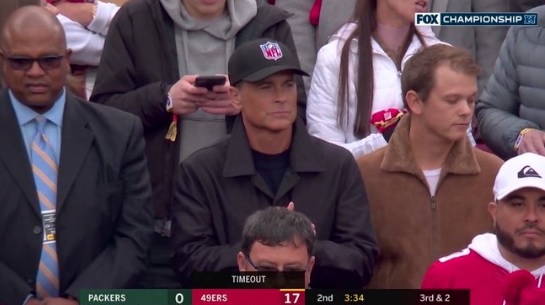 Sunday night’s NFC championship game between the Packers and the Niners was a one-sided bore fest. Thankfully the Internet was entertained by actor Rob Lowe, who went to the game wearing a ridiculous hat that prominently featured the NFL logo.

Rob Lowe is literally the only person who owns an NFL hat pic.twitter.com/NkZ0NtfAE9

hey Rob Lowe which team are you rooting for
“uhhh… the NFL" pic.twitter.com/BAdlRyk6gD

hi I’m Rob Lowe and when I watch football I root for the [checks hat] NFL pic.twitter.com/YuOQNYzk5u

Rob Lowe just rooting for a good game and success of the league pic.twitter.com/bPERC9oCGa

Rob Lowe: a fan, since his boyhood growing up in America, of the NFL. pic.twitter.com/9G7wQfH2EQ

Rob Lowe is ready to sub in just in case a ref gets hurt pic.twitter.com/rOtdXD9Trh

Lowe was caught off-guard by all the attention his hat was receiving online and had a pretty funny reaction to getting roasted by the Internet.

I didn’t expect my hat to be the most interesting part of this game! https://t.co/F54cTppe7C