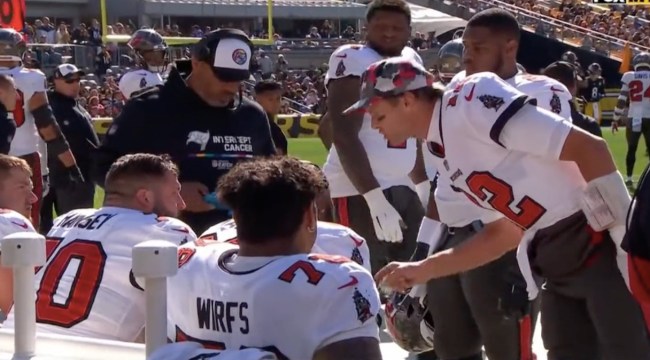 During Sunday’s 20-18 loss to the lowly Pittsburgh Steelers, future Hall of Fame quarterback Tom Brady was seen chewing out his offensive linemen on the sideline.

Brady talking to his linemen pic.twitter.com/gCIea3nNKW

Speaking to the media on Wednesday, Tampa Bay Buccaneers center Robert Hainsey addressed the incident, which immediately went viral on social media. Hainsey, to his credit, said all the right things and told reporters that Brady’s behavior is what he wants from his quarterback.

“I want nothing else from a quarterback than that, than a guy who’s willing to tell us what we need to do and step up,” Hainsey told reporters on Wednesday. “If he was just sitting over there and not getting us going, and not trying to help us, he wouldn’t be who he is today. So I love that from him. I know we all love that from him. It might look weird on TV, but that’s football. It’s a team sport, and that’s what you want from great teammates and great leaders, and he’s the best there is.”

Brady, Hainsey, and the rest of the Tampa Bay Bucs will look to get their season back on track on Sunday, October 23 when they take on the pitiful 1-5 Carolina Panthers, who became the first team in the league to fire their head coach this season when they canned Matt Rhule earlier this month.

Despite their slow start to the season — the Bucs are just 3-3 after six weeks — the team, who entered the year as one of the top three betting favorites to win this season’s Super Bowl, is still leading the NFC South.