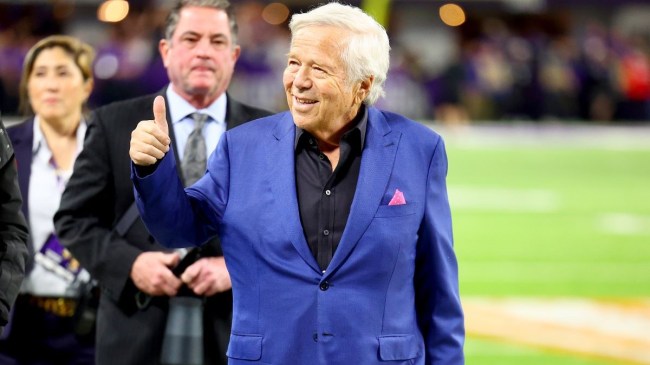 New England Patriots owner Robert Kraft has spent a fair bit of time in the news in recent months. On the lighter side of things, Kraft recently got remarried in an extravagant affair in New York City. His first wife, Myrna passed away in 2011 at the age of 68.

On the less pleasant side of things, Kraft reportedly got into a heated exchange with Dallas Cowboys owner Jerry Jones over the contract of NFL commissioner Roger Goodell. Kraft is also reportedly still pretty involved with his football team’s day-to-day operations. The longtime owner allegedly wanted Bill Belichick to start rookie quarterback Bailey Zappe over veteran backup Brian Hoyer after an injury to starter Mac Jones.

But now Kraft is back in the news, and it’s for a remarkable reason.

The University of Virginia football team underwent an unspeakable tragedy earlier this month.  On Nov. 13, 22-year-old Chris Jones Jr. shot and killed three members of the team. Jones, who himself was previously a member of the team also shot and injured two other UVA students, including another former teammate.

Cavaliers’ players Devin Chandler, D’Sean Perry and Lavel Davis Jr. all passed away due to their injuries. Virginia running back Mike Hollins was treated and released from the hospital following the shooting.

Virginia canceled its final two games of the season following the tragic incident. Cavaliers players were given time to mourn and attend the funerals of their teammates.

But getting to the funerals, which were held across the country, was not easy. That’s where Kraft came in.

Mike Florio of Pro Football Talk reports the Patriots’ owner loaned the team plane to the UVA football team at no cost so that the players may attend the funerals.

“D’Sean Perry’s funeral occurred on Saturday in Miami. The next day, Devin Chandler’s funeral happened in Virginia Beach. The family of Lavel Davis Jr. will conduct a celebration of life on Wednesday in North Charleston, South Carolina.” – via Pro Football Talk

New England played on Thanksgiving Day again the Minnesota Vikings. That allowed Kraft to offer the team plane to the university. It’s a remarkable gesture from Kraft. But that’s nothing new for the man behind one of the NFL’s greatest franchises.