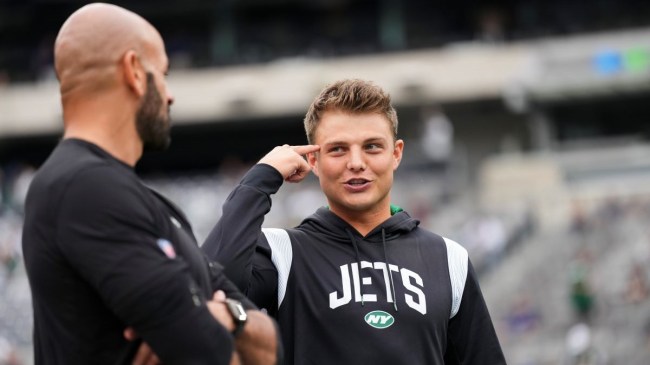 Zach Wilson’s days as the starting quarterback for the New York Jets might just be numbered. The Jets selected Wilson with the second overall pick in the 2021 NFL Draft. But the BYU product hasn’t come close to living up to those expectations.

In 20 career NFL games, Wilson has completed just 55.5 percent of his passes for 3,613 yards (180.6 YPG), 13 touchdowns and 16 interceptions. Wilson hasn’t exactly shown signs of improvement, either. In Sunday’s game against the New England Patriots, he was downright horrendous. The second-year signal-caller went just 9-of-22 for 77 yards as New York lost to New England  10-3.

Following the contest, Jets head coach Robert Saleh called his team’s offensive performance “dog sh*t.” Beyond the numbers, Wilson’s attitude has drawn the ire of his New York Jets teammates as well as a number of fans.

Saleh recently went to bat for his young starting quarterback, but now it appears the head coach has had to re-evaluate his thinking.

Robert Saleh Says Every Option Is On The Table For The Jets, Including Benching Zach Wilson

The Jets have struggled for the entire season on the offensive side of the ball. They rank 22nd in the NFL with 19.9 points per game and 28th with 311.8 yards per game. Despite that, Saleh had remained steadfast with Wilson as his starter.

"Everything needs to be evaluated. When you put up 100 yards of offense, I don't care how good New England is, and they are good, it's unacceptable. That's not NFL football. Everything is being talked about"

– Robert Saleh on going from committal to non-committal on Zach Wilson pic.twitter.com/tzeM8SYWrH

The second-year head coach spoke to members of the media on Monday and told that he was evaluating aspects of his offense, including Wilson

“Everything needs to be evaluated. When you put up 100 yards of offense, I don’t care how good New England is, and they are good, it’s unacceptable. That’s not NFL football. So everything is just being talked about,” he said.

More specifically, Saleh said he told Wilson his starting job was not guaranteed. He also told reporters that Wilson needs to be more accountable.

For the first time, #Jets coach Robert Saleh left the door open for a QB change, saying all options are on the table. Zach Wilson has been informed his job is up in the air.

Robert Saleh says Zach Wilson "could be better in front of the podium" and take responsibility:

"I don't think it's indicative of how he feels about his team or teammates. I don't think he is naïve to the fact that offense wasn't played to the best of their ability" pic.twitter.com/0yJi9zNK6n

Finally some accountability for the qb. Please stop coddling him. #NYJets https://t.co/aTR0aU8nbS

#JETS – give saleh credit, maybe this gets richie rich to focus https://t.co/UrqQxhMXlo

Good. Make these young guys earn their spot in the league. As bad as he’s been so far in his career he needs to have to fight for his spot on that team https://t.co/UnsPqJAr6p

New York currently sits at 6-4 on the year and just outside of the AFC playoff picture on tiebreakers.