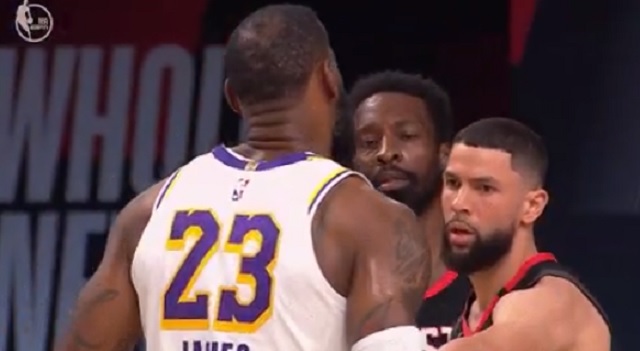 Austin Rivers saw his life flash before his eyes during Saturday night’s game 5 between the Lakers and the Rockets.

Late in the fourth quarter Rivers accidentally threw the ball at LeBron’s head after a foul call and LeBron looked like he was ready to fight Rivers for a brief moment before cooling off.

LeBron James was about to end Austin Rivers. This game is pure comedy pic.twitter.com/zRjuLSpfYN

You can see the terror in Rivers’ eyes as he pleaded with LeBron in the replay.

The Internet immediately had jokes about Rivers’ being terrified of LeBron.

Austin Rivers to Lebron after swating a ball at his head pic.twitter.com/TJq6tke5pB

Austin Rivers life flashing before his eyes when he hit LeBron with the ball pic.twitter.com/QQ5zsJw8Tg