Roger Goodell On Colin Kaepernick ‘I Wish We Had Listened Earlier’ 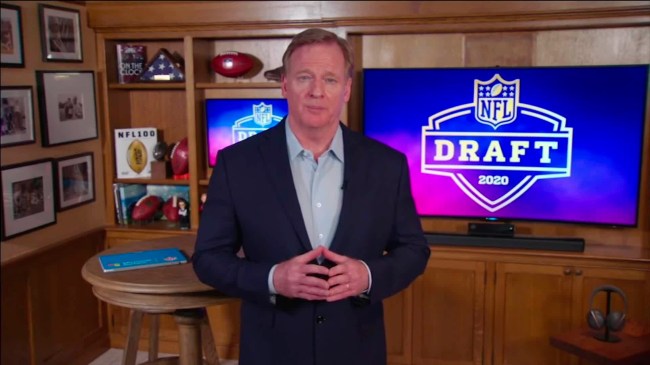 In an interview with former NFL linebacker Emmanuel Acho, who now hosts a show called “Uncomfortable Conversations with a Black Man, NFL commissioner Rodger Goodell has finally addressed the Colin Kaepernick situation after several players called on him to apologize to the former San Francisco 49er quarterback.

During the interview, Acho asked Goodell what would he say if given the opportunity to apologize to Kaepernick..

This is what Roger Goodell told @EmmanuelAcho in response to how he would apologize to Colin Kaepernick: “I wish we had listened earlier, Kaep, to what you were kneeling about and what you were trying to bring attention to.” https://t.co/xAR2uJsPTq

Goodell goes on to talk about his current views on players kneeling during the anthem to protest police brutality.

“It is not about the flag. The message here, and what our players are doing, is being mischaracterized,” Goodell said. “These are not people who are unpatriotic, they’re not disloyal, they’re not against our military. In fact, many of those guys were in the military, and they’re a military family. What they were trying to do was exercise their right to bring attention to something that needs to get fixed. That misrepresentation in who they were and what they were doing was a thing that really gnawed at me.”

Despite the fact that Goodell and the NFL have warmed to Kaepernick’s ideas of protesting during the anthem there are currently no teams in interested in signing the veteran QB.

The realization that Kaepernick was onto something also created a sense that he’d soon be on an NFL roster, coupled with plenty of comments from NFL figures endorsing his return, like Chargers coach Anthony Lynn and Seahawks coach Pete Carroll. More than two months ago, we posted the simple question of whether the talk would lead to action.

More than two months later, it hasn’t. Per a source with knowledge of the situation, Kaepernick has drawn no interest.