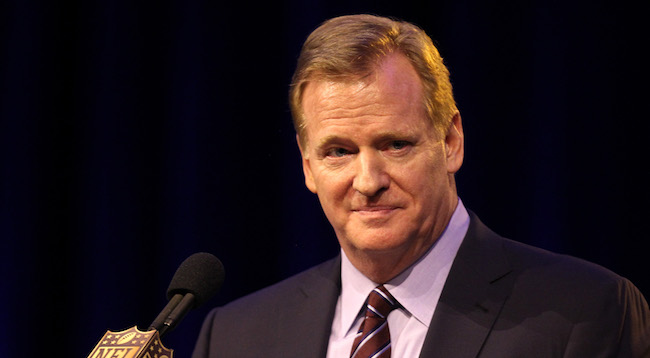 Over the past 15 years, a stream of evidence has supported the claim that playing football damages the brain. Possibly the most persuasive study to date was published in July  in the medical journal JAMA, finding that 110 of 111 brains donated by NFL players showed signs of CTE. 99 percent. The study led to the swift retirement of 26-year-old Ravens center and “the smartest man in football” John Urschel.

Despite the mounting evidence, Roger Goodell and the NFL have treated the researchers’ claims with the same seriousness as a child insisting there’s a monster under his bed–evident in the league’s deeply flawed concussion research, omitting 100 diagnosed concussions from its supposedly all-encompassing study from 1996-2001.

And, just days after the NFL ended its brain research partnership with the National Institute of Health with $16 million of the money still unspent, Goodell has continued to pettifog the issue.

The NFL Commissioner was at the Jets facility on Monday and answered questions from fans at a forum with Jets’ rookie safety Jamal Adams. He had this to say:

“The average NFL player lives five years longer than you,” Goodell said. “So their lifespan is actually longer and healthier. And I think because of all the advancements, including the medical care, that number is going to even increase for them.”

“I think the one thing everyone agrees on is there’s an awful lot more questions than there are answers at this point,” Goodell said.

Just moments after, Jamal Adams said that he is more than willing to die on the football field, as his passion outweighs the inherent risks of playing football. If Goodell just told the truth and said, “Hey we have a lot of work to do in the player safety department but 99% of players in the league would still choose to play given the dangers,” I’d respect him so much more. But instead, he pussy foots around the issue and hangs his hat on the “lot of questions, not a lot of answers” schtick to cover his ass. Stop pissing on our damaged heads and tell us its raining, donkey face.