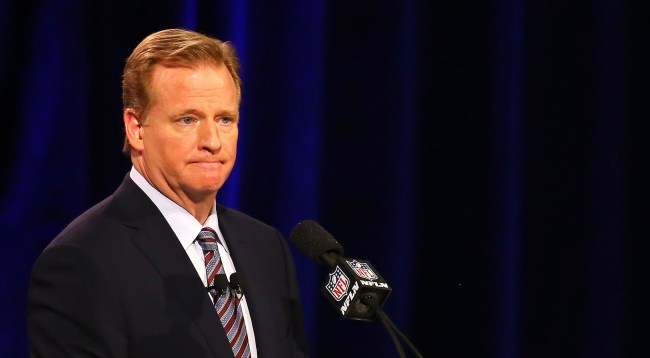 On Wednesday in Texas, National Football League spokesman Joe Lockhart said, “The commissioner I think has been clear that he views this as his last contract and will allow him to deal with some of the important issues that we know are on the horizon.” The remarks were made during the NFL owner meetings in Dallas, according to the Associated Press.

The new agreement, which was finalized by the NFL’s compensation committee, begins after Goodell’s current deal expires in 2019. “We are pleased to report that there is a nearly unanimous consensus among the ownership in favor of signing the contract extension now,” the NFL’s compensation committee announced in a memo. “We are pleased to have resolved this issue and we appreciate the strong support received from our partners.”

During the commish’s new five-year contract, Goodell will oversee negotiations on a new collective-bargaining agreement with the NFL players union when the current terms expire in 2021. Goodell will be trying desperately to appease the players so they don’t strike or let the league endure another lockout. Goodell will reportedly help the NFL find capable candidates as his successor. “The commissioner has been clear that he views this as his last contract and will allow him to both deal with some of the important issues that we know are on the horizon — the CBA, our network partners — and it’ll also allow him to spend a significant amount of time not only at his level but among his executives working on succession,” Lockhart said. Under Goodell’s extension, he will also have to make new TV network deals. The NFL currently has deals with CBS, Fox, NBC, and ESPN, but they expire at the end of the 2022 season. ESPN’s contract with the NFL runs out at the end of the 2021 season).

However, Goodell was not so definitive that he will retire after his extension runs out. “I haven’t made any determinations,” Goodell said of his future as NFL commissioner on Wednesday. “I’m looking forward to the challenges, I think our league is in a great position.” The NFL commish added, “I think there is a limit to how many years you should serve in this. But that’s a determination that’s made, obviously, with the ownership and also by yourself and your family and that’s something that we’ve done and I’m prepared and ready to go.”

Goodell will reportedly earn a guaranteed annual salary of $3.5 million during his new contract with incentives that could push his yearly earnings to as much as $50 million. Goodell will also have access to a private plane for both business and personal travel, but he will have to pay for any personal trips. “The commissioner, as he does now, has use of a plane, but as he does now, he pays for private use,” Lockhart said. “Going forward, if he wants to use, we use NetJets, and if he wants to use that, he will pay for that. There’s been significant uninformed discussion about that.” Since becoming the commissioner in 2006, Goodell has earned more than $200 million and will have the opportunity to make another $200 million with his new extension if he hits all of the incentives.

NFL revenue is expected to reach a record $14 billion in 2017. However, the league has had a tumultuous year because of factors such as declining television ratings, player discipline issues, and the national anthem protest controversy. Over his 10-year reign, Goodell has faced criticisms from team owners, players, and fans.