As the stigma on marijuana use is being shattered across the country and it’s recreational legality has been implemented in eight states and D.C. (as well as legal for medicinal use in 29 states), Roger Goodell continues to be the delusional kill joy.

Goodell said on Mike & Mike that marijuana is addictive, unhealthy, and is against letting NFL players use it recreationally. His words exactly:

“I think you still have to look at a lot of aspects of marijuana use,” Goodell said. “Is it something that can be negative to the health of our players? Listen, you’re ingesting smoke, so that’s not usually a very positive thing that people would say. It does have addictive nature. There are a lot of compounds in marijuana that may not be healthy for the players long-term. All of those things have to be considered. And it’s not as simple as someone just wants to feel better after a game. We really want to help our players in that circumstance but I want to make sure that the negative consequences aren’t something that is something that we’ll be held accountable for some years down the road.”

Goodell doesn’t realize that he could be doing more harm than good by refusing to take weed off the banned substance list. As The Washington Post’s Rick Maese points out, many NFL players after leap-frogging weed to use actually highly addictive opioids. 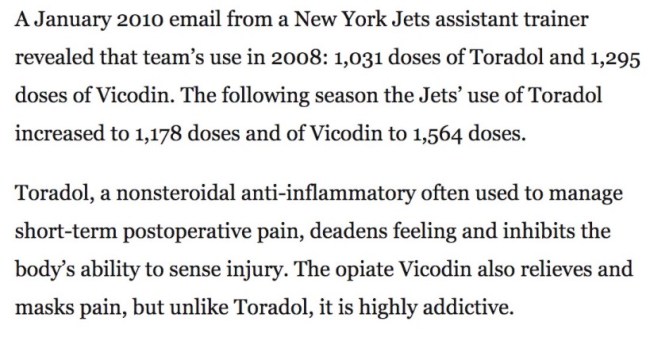 I, for one, will dance in the streets when this clown steps down as commish.