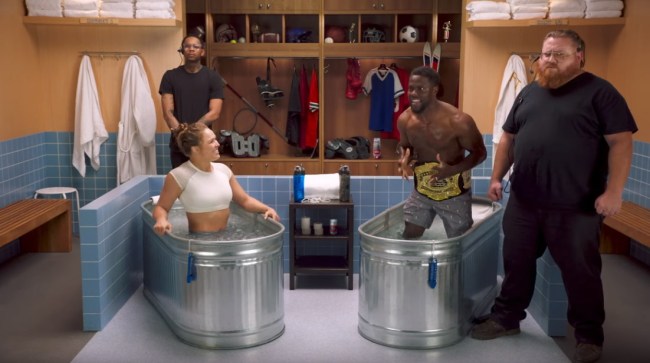 Kevin Hart is back in the cold tub for his latest episode of “Cold As Balls,” this time with WWE superstar and UFC Champion, Ronda Rousey, who was just handed the first loss of her WWE career over the weekend.

Episode highlights, other than Rousey’s lower lip quivering as she tries to talk while freezing her ass off…

• Rousey and Hart, who are both swimmers, talking about their favorite stroke and how she got into swimming.

• Ronda going into intimate detail about her life from how she dealt with her speech impediment, losing her father as a child, winning her first Olympic medal at her second Olympics because the refs screwed her over at her first Olympic Games at 16-years-old, to transitioning into MMA.

• The important lesson that Rowdy Rowdy Piper’s son taught her.

And, oh yeah, Kevin Hart, until this episode, had never heard of the term “FOMO.”

Be sure to stick around until the very end when Rousey cuts a wrestling promo and makes Kevin crap his pants in fear.

Check out previous and future episodes of “Cold As Balls” on the Laugh Out Loud app and LaughOutLoud.com.