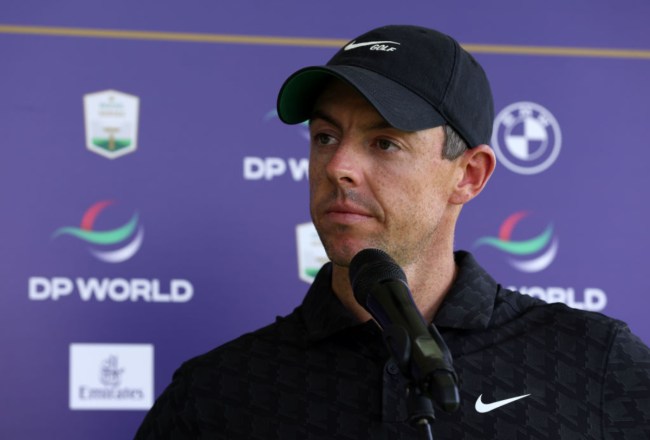 Rory McIlroy’s thoughts about a breakaway golf tour backed by Saudi Arabian money have not changed. It’s still going to be an emphatic no for him, and with Greg Norman taking the reigns of CEO, it’s only strengthened McIlroy’s stance against the idea.

Back in late-October, Norman was officially named CEO of LIV Golf Investments, a Saudi Arabian-funded entity that is set to invest $200 million into the Asian Tour over the next 10 years. The first venture on the docket is a 10-event series beginning in 2022, but the ultimate goal is to create a global golf league, tour, circuit, or whatever you want to call it, to rival the PGA Tour.

There have been rumblings of Saudi-backed rival golf circuits for years now, some of which have contacted McIlroy as many as seven years ago. He wasn’t about the idea then and he’s not about the idea today.

McIlroy is teeing it up in this week’s DP World Tour Championship in Dubai and was asked to share his thoughts about Norman’s involvement with LIV Golf Investments. He didn’t mince words.

“That has only hardened my view,” McIlroy explained, according to Golf Digest. “There’s been a select few individuals who have come on board with the other people and that also hardened my view even more.”

McIlroy Has Made His Stance About A Breakaway Tour Very Clear

None of this from McIlroy should be a surprise. McIlroy opposed the idea of playing in the Saudi Arabia Invitational back in 2019. He was also the first big-time player to sound off against the Premier Golf League, which was proposed in early 2020.

“The more I’ve thought about it, the more I don’t like it. The one thing as a professional golfer in my position that I value is the fact that I have autonomy and freedom over everything that I do,” McIlroy said about the PGL in February of 2020. “I pick and choose – this is a perfect example [this week]. Some guys this week made the choice to not come to Mexico. If you go and play this other league, you’re not going to have that choice.”

As for McIlroy’s direct shot at Norman, those two have a bit of history with one another. During the peak of the PGL rumors, McIlroy referenced Norman’s proposition of the World Golf Tour in the 1990’s saying he wanted to be on the right side of things.

“I would like to be on the right side of history with this one, just sort of as Arnold [Palmer] was with the whole Greg Norman thing in the ’90s,” McIlroy said at the WGC-Mexico Championship.

Norman said that McIlroy’s comments in Mexico that week “cut deep” and “left scar tissue for me.”