NASCAR Driver Ross Chastain Explains What It Means To Be Chastain’d, In Direct Response To Kyle Busch 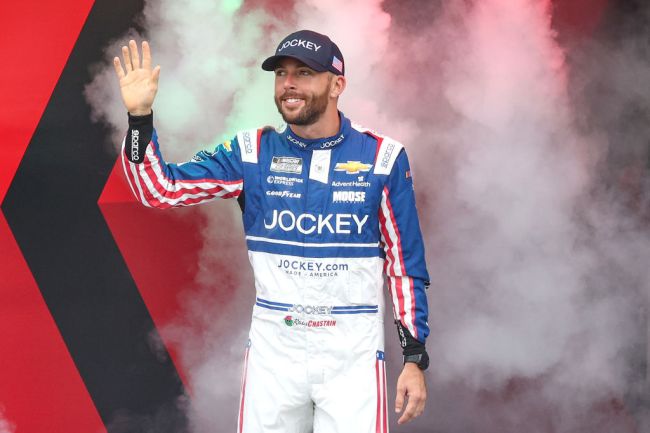 It’s a bad year to be a watermelon around Ross Chastain. Per tradition, the driver of the #1 Chevrolet Camaro ZL1 for TrackHouse Racing has smashed two watermelons in victory lane so far this year.

Think of it like spiking the football in the endzone. Win a race, smash a watermelon. Chastain grew up on a watermelon farm in Florida, earning him the name “The Watermelon Man” in the NASCAR world. This year, he’s on a roll, winning the first two Cup races of his career and earning enough points to push through to the playoffs.  “I missed it last year and that was not fun. I wanted to be here,” Chastain tells me during the NASCAR Playoffs media day.

Chastain’s determination to do things his way has ruffled some feathers with his peers this season. Denny Hamlin and Chastain have feuded on the track all year, perhaps culminating in Chastain spinning Hamlin with 14 laps to go in Atlanta. Kyle Busch, meanwhile, said he was “Chastain’d” at Richmond in the final stage of the 400-lap race. Chastain made contact with Kyle Busch’s left-rear quarter panel, causing him to go sideways into traffic and pushing him back in the pack.

With the NASCAR playoff opener starting at Darlington on Sunday, I asked him what he thought about Kyle Busch turning his last name into a verb.

Ross Chastain on being Chastain’d

“Oh, let me just start with being Chastain’d is nothing new, it’s been happening for generations,” Chastain explains. “What it typically has meant is that Chastain invites you out to dinner and then forgets their wallet and you have to pay the bills. So it could also be an invitation to go to the farm and turns out we only needed you to open gates all day, ride shotgun with us, and open 15 different gates. So it’s nothing new for people that know us -= my dad and brother and me and other older members of our family. Definitely used in a little different context now, but I don’t buy into all of the extra stuff. It is what it is.”

“I talked to Kyle after Richmond and definitely didn’t say anything out of the ordinary when we talked. So definitely could clean up a lot of stuff on my end and that’s goal number one moving forward.”

I asked him if he has a “watch your back?!” attitude now that playoffs are underway.

“My main goal number one is to finish these races,” Chastain answers. “So I’m the ultimate protector of my race car as the guy driving it. I can not race these guys like I will be around them. So there is a level of trust at times or in play all the time, really, when we’re racing against each other. But I can only just try to drive my cars as fast as I can and put myself in the best situation and the best circumstance to win and let circumstances kind of play out how they may, I mean, this is big time auto racing and there’s a lot – even though I feel like I can – that I cannot control.”

I asked Chastain about a Fox Sports headline that ran after a recent interview: Has Ross Chastain made too many enemies to win a Cup title? His response:

“Yeah, I don’t know. I don’t know what my competitors are thinking, right? The coolest part is that we’ve got 10 weeks to go and experience these playoffs. And I don’t have answers for you. I can only go race.”

This is also pretty exciting for TrackHouse too, of course. I haven’t seen many people ask you about the team. And I feel like, how is the team feeling about being here, arriving, especially because it’s such a young team too

“Yeah. We feel good, right? We’re transitioning through our arrival into the sport with two cars. We put both of them in the playoffs. We’ve won three races and the speed of our race cars have given us this spotlight and ultimately we’re a race car team, right? That’s what we do. So continuing to bring fast cars to the track for a long time to come is the goal, and can’t wait to keep experiencing that with my team.”

Will you get a team call from Pitbull before we kick off some playoff action?

I don’t know, we text more than we call. We have talked on the phone several times, but we’re more texters.

They took America and put it on our race car. It’s awesome. It stands out. It’s just so patriotic and so proud to fly the colors, right? And to have a true American iconic brand like Jockey want to be a part of TrackHouse and be a part of this team is everything I want.

And I just want people to want to be a part of and want to cheer us on. And it’s really cool to be one of the drivers of the Jockey cars.

In Partnership With Jockey 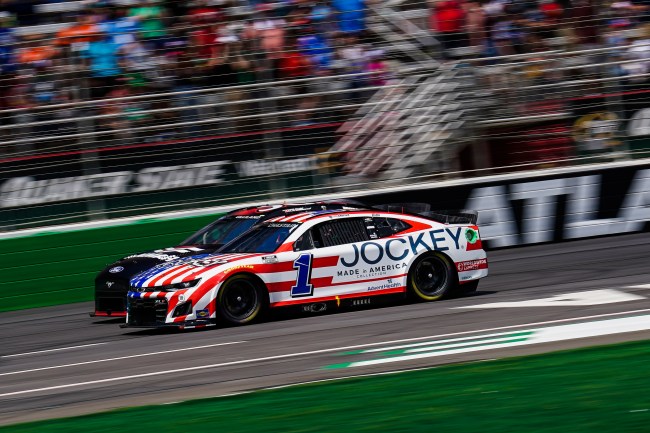 Jockey Celebrates 'Made In America' Collection Clothing In The Most American Way Possible: With An Epic NASCAR Car