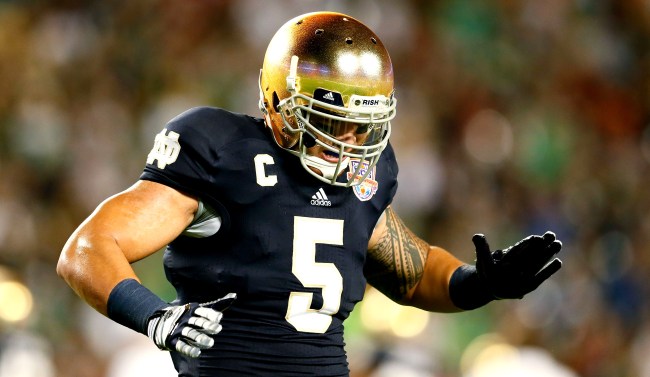 Even with almost no professional sports currently active there is still one national pastime that always pleases the masses no matter what life throws at us: dunking on Twitter troll Darren Rovell.

Now, anyone who was around and was interested in college football in 2012 is very familiar with the story of former Notre Dame linebacker Manti Te’o and his “dead girlfriend” Lennay Kekua.

After being a finalist for the 2012 Heisman Trophy, Te’o and the 12-0 Notre Dame Fighting Irish were getting ready to play Alabama in the BCS National Championship Game.

It was then that Te’o made even more news by informing the media that his “girlfriend” Lennay Kekua had passed away and helped inspire him to greatness that season.

Te’o told Sports Illustrated about how the Kekua had been both in a major car accident and diagnosed with leukemia before passing away at the tender age of 22.

Te’o also shared his inpsiring tale with ESPN’s College GameDay and the South Bend Tribune and on and on tit went.

Until (the real) Deadspin got involved… and discovered Lennay Kekua was not a real person… and that Te’o had been catfished by a man named Ronaiah Tuiasosopo.

At one point in the aftermath of the hoax being exposed, a friend of Tuiasosopo told Deadspin he was “80 percent sure” that Manti Te’o was “in on it,” and that they made up Kekua’s death just for the publicity.

And now, the story is going to be the subject of an edition of ESPN’s Backstory.

Up next on BACKSTORY… Manti Te’o: Too Good to Check.

Which leads us back to Darren Rovell.

Replaying to the announcement of the show featuring Manti Teo and his fake dead girlfriend, Rovell tweeted that it was the “most shocking story in sports in the last decade.”

The most shocking story in sports in the last decade… https://t.co/tBVrdBHMoH

When called out on his claim, Rovell asked his followers to list sports stories that were more shocking.

The internet was more than happy to oblige.

I still can’t get over the business reporter can’t count. Wow.

(The Sandusky scandal occurred between November 2011 and June 2012, but who’s counting? Not Darren!)

A star tight end for the most recognizable NFL team turned out to be a serial killer, the 2nd best player in NBA Switch teams three times, Penn State covered up molesting kids, and Kobe died. This is your worst tweet yet.

I also forgot about Aaron Hernandez killing people, decades of sexual assault at Penn State, Kaepernick getting blacklisted, USA Gymnastics sex abuse scandal, Leister City winning the premier league, and plenty of others. How do you have a job when you suck so bad at it?

Aaron Hernandez being a serial killer, Penn State covering up years of pedifelia, Tiger Woods being outed as a cheating sex addict, Astros scandal, An NBA ref claiming to have fixed games. But ya a college kid getting catfished for sure more shocking