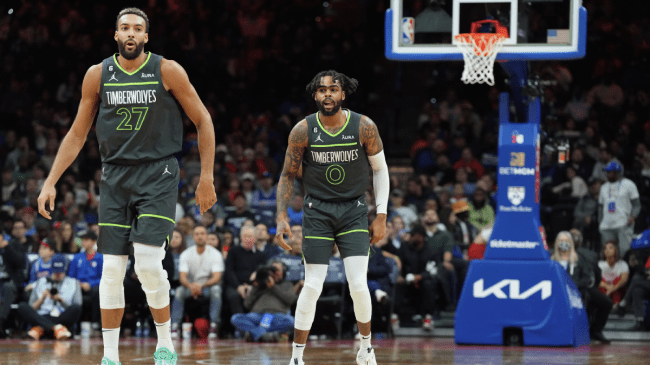 Rudy Gobert isn’t making any friends in Minnesota. The big man was dealt to the Timberwolves over the offseason after demanding a trade from the Jazz. While he’s been a force in the paint, recent comments might not sit well with the fanbase.

Gobert has averaged 13.2 points and 12.3 boards a night after coming over from Utah in 2022. Unfortunately, it’s not been enough for his new team to see sustained success on the court.

The Timberwolves are just 9-8, good for the 10th spot in the Western Conference standings. Minnesota got off to a 5-8 start before ripping off four straight wins over the last week. That positive momentum hasn’t always been enough to satisfy the fans in attendance.

Timberwolves fans have been heard booing the team on occasion, most recently amid a losing skid where they dropped six of seven games. Gobert took a shot at those attendees earlier this week.

Jon Krawczynski of The Athletic wrote a piece about Rudy Gobert’s expectation of the home crowd. He was heard telling fans to stay home if they want to boo the Timberwolves.

“I just don’t appreciate people that come in and boo your team. When you’re a fan, you’ve got to support your team in the tough or the good moments.”

The criticism was met with heavy reaction on social media. Take a look at what NBA fans had to say about the comments on Twitter.

One person wrote, “They pay good money to watch you, they can boo if they want.” Another replied, “This man is so soft, it’s called constructive criticism.”

Others made it more personal, targeting Gobert’s play directly. This fan commented, “They wouldn’t be booing if he worked on his post game.”

Gobert will look to brush the criticism aside as he attempts to lead Minnesota back to the playoffs. If the T’wolves can continue playing like they have of late, those boo birds should subside.