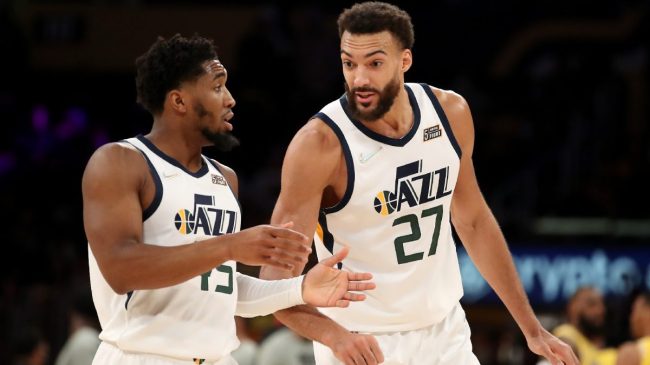 Rudy Gobert might have played his last game in Utah.

The Jazz center is not happy with his situation, and more notably, the relationship with Donovan Mitchell. He’s reportedly demanding that the team either deal him or Mitchell to another suitor ahead of the 2022-23 season.

Jazz C Rudy Gobert is likely to demand that either him or G Donovan Mitchell be traded in the next few days, per @realOCsports pic.twitter.com/xS8bttXSoG

This comes after the Jazz were eliminated from the NBA Playoffs, losing a series 4-2 to the Dallas Mavericks.

If the reports are true, Utah will have a decision to make. Mitchell has been the team’s leading scorer over the last two seasons, finishing just a tick under 26 points a night in 2022.

Gobert averaged a double-double this past season at 15.6 points and 14.7 rebounds a game.

The shocking news of trade demands broke on Monday afternoon with SiriusXM host Sean O’Connell being the first on the scene.

Rudy Gobert believes that Donovan Mitchell is a liability

I know I am not usually @utahjazz breaking news guy, but a source close to situation has informed me that Rudy Gobert is at "him or me" point with Donovan Mitchell and will demand that one of them be traded in next few days. Doesn't feel they will win championship together.

Gobert is apparently at a “him or me” point with the Jazz with plans to ask the team for a trade in the coming days. Going further, he feels that Mitchell is a defensive liability while Gobert is seeing an uptick in production.

Rudy feels that his own numbers are consistent or getting better, while Don is D liability and is falling off in terms of explosiveness. Gobert also aware of at least 1 Western Conference power that would be willing to pay handsomely for his abilities. (NBA teams never tamper..)

Gobert is a three-time defender of the year while Mitchell’s effort on that side of the ball is often questioned.

Making things more interesting, Gobert is aware of at least one “Western Conference power that would be willing to pay handsomely for his abilities.”

And why wouldn’t they?

While Gobert is often criticized for his scoring, most teams will take 16 points, 15 boards a night from their bigs. Add that to his defensive prowess and four-time All-NBA status and there’s surely a few teams that would be happy to add him to the roster.

The NBA world was quick to react to the news on social media. Check out the Twitter response below.

The Jazz to Rudy Gobert when the reports said it’s either him or Donavan Mitchell pic.twitter.com/CFNtDlVj3p

No one should be surprised, we've seen Rudy Gobert's frustration boiling throughout the season. Stomping his feet, yelling at people out of posting, constantly calling out the defense and even calling out Mitchell by saying Booker buys in on defense. pic.twitter.com/gQSR7RgwdK

People can be upset all they want, but it's been pretty obvious that the Jazz were going to trade Gobert this offseason for a long time.

Barring Mitchell demanding a trade (which I don't see happening), trading Rudy is the only move that makes sense. Iy's always been that way.

Neither Rudy Gobert nor Donovan Mitchell is particularly close to being good enough to be the best player on a championship team. So this squabble is really funny. https://t.co/bZi9aALjpa

We’ll see what the future holds for these two players, as well as who the Jazz value more.