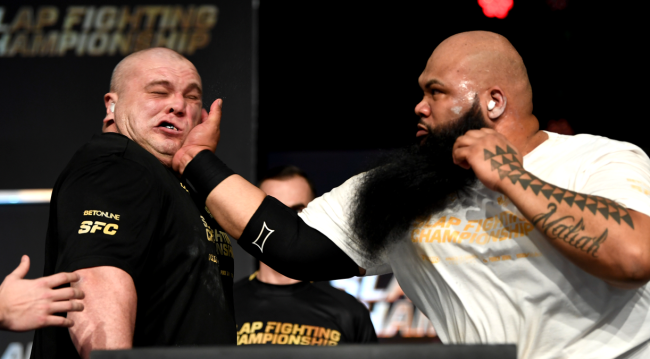 New details about the rules and regulations for Dana White’s new slap fighting league, Power Slap, show how batsh-t crazy this thing is going to be.

A couple of weeks ago, the UFC president held a short press conference where he explained why he was creating a new slap fighting league, who would be in charge of it, what channel it would air on, and shared a bullet-point list of the main rules.

It now turns out, however, that the list of rules for Power Slap that White shared at the presser were just the tip of the insane iceberg.

After officially being granted a promoter’s license and getting approval for the rules and regulations of the slap fighting league by the Nevada Athletic Commission (NAC) in October, there has been a few changes slash additions.

Tellingly, one of the questions NAC Chairman Stephen Cloobeck asked UFC Chief Business Officer Hunter Campbell as they were finalizing the official rules was: “You will make sure no one dies?”

Fast forward to this week and the full list of rules, which can be viewed here, have been expanded to include much more detail.

The commission voted unanimously to regulate the league this past October and in this month presented the initial rules for slap fighting, which add finer detail to the requirements of slap competitors and the officials who oversee the contest. Those include multiple referees, corners, and “catchers” to “use efforts to limit the impact of a participant’s head to the Power Slap Stage where feasible and to protect the participants from falling off the Power Slap Stage,” according to the text.

Other rules of interest include contests lasting up to 10 rounds (Power Slap plans to have three and five round fights), the person being slapped has to hold on to a “Power Slap Stick” behind their back while getting smacked, if the defender flinches then it is a foul, and there will be a replay official.

While slapping, competitors are only allowed to use the “entire striking of the fingers and palm above the wrist,” and “must make contact and impact simultaneously.” The regulations add “strikers may not lead impact with the carpal bones.” Strikers must keep both feet on the ground, can’t pivot on the balls of their feet when slapping, and must stay within a “striker box” outlined by the promoter.

As for the permitted target area, it consists “of the cheek, tracing from the jawline but excluding the chin (i.e., the area measured from the lips downward) and ear, to the height of the beginning of the eye, below and excluding the temple, then to the middle of the face on the outside of the eye and back to the starting point on the jawline only.”

Fingers may contact other parts of the face or head as an “extension” of a slap.” But any deviation from the slapping technique or target, like “a facial orifice,” is considered a “clubbing foul.”

Perhaps the craziest rules of them all surround when a fighter gets knocked down or out. If knocked down, they have a 10 count to “rise to their feet and establish their fitness to continue as determined by the referee, and confirmed by the ringside physician.”

If the defender gets KTFO on the very first slap of the bout, the promoter has the option of allowing them to continue, if they are able to recover within a two-minute time period that starts after the knockout.

“Once the referee declares the finish, a clock of two minutes begins,” the rule reads. “During this time, the Defender is given two minutes to recover, establish their fitness to continue as determined by the referee and cleared by the supervising physician and complete one Permitted Slap of their opponent. If the return strike results in a technical knockout or knockout of their opponent, the match is declared a Draw. If the return strike has any other result, then the Match result stands.”

An eight-episode season of the Power Slap League will air on TBS. Let’s just hope no one gets killed.