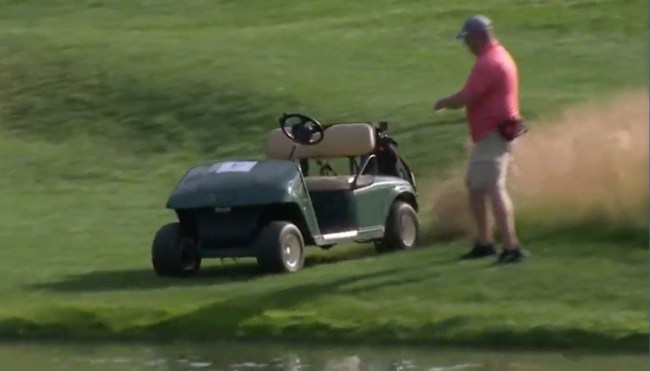 It’s been a little over a decade since the world was treated to one of the more bizarre incidents to ever unfold at a sporting event after a runaway golf cart bowled over a group of unsuspecting people (including Danny Amendola’s dad) who’d gathered at midfield at AT&T Stadium in the wake of a Texas high school football championship game in 2011.

It became a bit easier to laugh about the incident after learning no one was seriously injured in the freak accident that eventually came to an end when one man bravely hopped onto the rogue cart and managed to bring it to a stop.

However, it’s a comparative lack of heroism (as well as injuries) that makes it much easier to laugh about a similar incident that unfolded at the Travelers Championship on Thursday.

The scene in question unfolded near the 16th hole at TPC River Highlands, as the first round was briefly interrupted by a commotion from the nearby crowd. It didn’t take long for broadcasters to discover the source of the excitement: the unmanned golf cart that made its way down a hill before splashing into a pond.

As you can see, a tournament volunteer briefly considered attempting to intervene but ultimately (and wisely) opted to let it become someone else’s problem by easing up just before the golf cart landed in the water with a splash.

That, my friends, is what they refer to as a “business decision.”