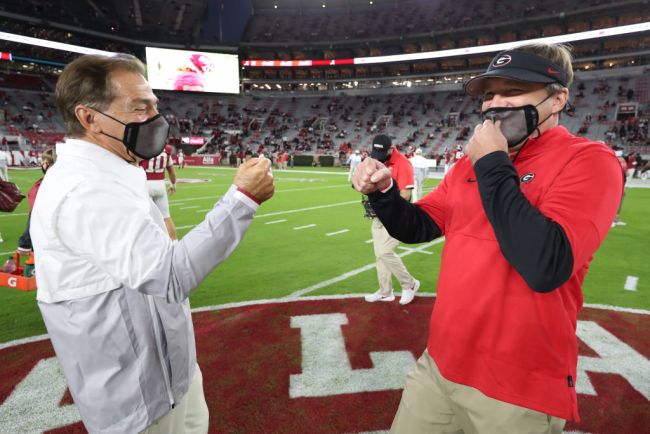 Rush Propst is best-known for being the head football coach at Hoover High School when MTV documented the program in the mid-2000s in the show called ‘Two A Days.’ You may recognize his name from the many controversies he’s been a part of over the years as well including reports of extramarital affairs and him later admitting to having a relationship, and a child, outside of his marriage.

Propst is now the head coach at Valdosta High School in Georgia where he’s currently being investigated for improper use of school funds and recruiting misconduct.

To say controversies have followed this man around over the years would be an understatement and now he’s tossing out some major allegations about Georgia head coach Kirby Smart and Alabama head coach Nick Saban paying recruits.

Valdosta’s school board is being sued by former head football coach Alan Rodemaker and the deposition from Valdosta Touchdown Club director Michael Nelson, the man Propst is allegedly talking to in the allegation-filled video, is being used in the lawsuit.

A user by the name of ‘smoking gun’ uploaded the video to YouTube titled ‘valdosta coach Rush Propst and TD Club Pres. M. Nub Nelson.’ While there’s plenty discussed in the 15-minute video, it’s Propst’s comments about Smart and Saban that stand out the most.

Smart and the Bulldogs are the first to come up in conversation and Propst discusses Georgia’s program of having a ‘handler.’ He goes as far as to say that recruits are being paid between $90,000 and $150,000 to sign. Propst offered a specified example saying that there were three different $60,000 donation made to the program just after Nick Chubb decided to return to school instead of entering the NFL Draft early.

We got a rat Kirby! pic.twitter.com/syi4Zz0ipi

Propst then started to talk about Saban, alleging that the only person he answers to is Paul ‘Bear’ Bryant Jr., who Propst alleges is the only man Saban and the Tide need to fund recruiting operations. Propst talks about funds in Mobile, Ala. that were set up by Bryant in the 1960’s and 1970’s. The Bryant family founded the People’s Bank in the 60’s, sold that, founded Bryant Bank in 2005, and bought and sold various companies over the year including the selling of Ready Mix USA to Cemex for $350 million in 2011.

Rush Propst claims to have dirt on Nick Saban’s Alabama program, too pic.twitter.com/PFNtKVhGTr

These are claims and allegations from Propst, nothing he says throughout the 15-minute clip can be verified. He also doesn’t seem to be the most trustworthy of people when it comes to the resume he’s built over the years, but you can take his claims however you’d like. He is someone that’s coached big-time high school football in both Georgia and Alabama and has seen a number of his players go on to play for both programs over the years.