Russell Westbrook Looked Really Sad On The Bench, Bradly Beal Refused To Speak To The Media After Wizards Lose To Go 0-4 On The Season 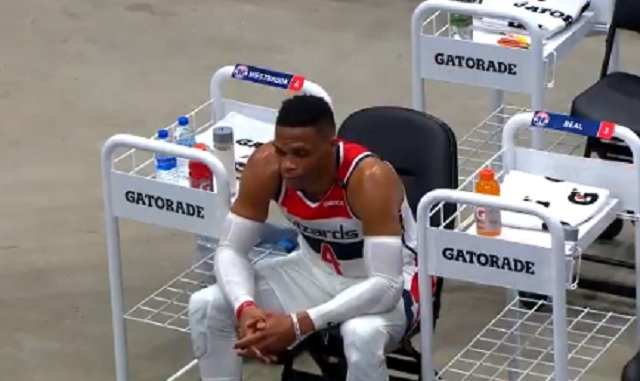 On Tuesday night, the Wizards lost to the Bulls to fall to 0-4 on the season, and it doesn’t seem like team’s biggest stars are not happy with their situation.

During the game, Wizards superstar Russell Westbrook, who forced his way out of Houston this offseason, was seen looking pretty depressed on the bench.

all of us rn pic.twitter.com/SXMDLUqETE

The team’s other superstar, Bradley Beal, refused to speak to the media after the game.

Bradley Beal left and did not speak with the media tonight. That rarely happens with him and it tells you all you need to know about how he feels following this loss.

Westbrook did speak to the media, and he was pretty honesty with how he was feeling currently.

Russell Westbrook: "I really, really hate losing… when adversity hits, it's a true measure of who you are as a man. Having a little adversity early on, that's okay."

It’s still early in the season and the Wizards still have a bit of time to figure things out but with a shortened season due to Covid-19 they better snap out of their fun sooner than later.