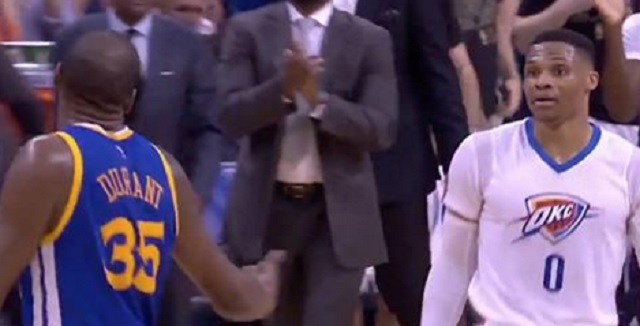 Kevin Durant and Russell Westbrook awkwardly ate at the same Oklahoma City restaurant Saturday night after the Warriors’ beat the Thunder 130-114 in Durant’s return to OKC.

After the game, both players were spotted at a popular Thunder hangout eating dinner and were both reportedly just 15 feet away from each other.

Kevin Durant and several members of the Golden State Warriors had dinner at the Oklahoma City restaurant whose manager said he’d turned down a request from Durant’s representatives to rent it out following the team’s win Saturday night over the Thunder.

Russell Westbrook was also dining at the popular Oklahoma City restaurant Mahogany Prime Steakhouse on Saturday night, but was seated in a different area. He didn’t interact with Durant.

Dave Osborn, the proprietor of Mahogany’s downtown location, said Durant’s reps called “three or four weeks ago” requesting to rent out the entire restaurant for the Warriors after the game.

I'm told Kevin Durant and Russell Westbrook are both at Mahogany right now sitting 15 feet apart, but not speaking.

Kevin Durant is eating dinner at Mahogany after all. pic.twitter.com/c6zeZECEjd