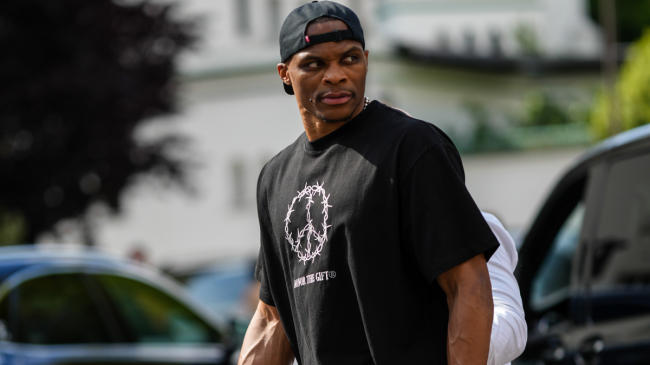 The guard was the subject of the trade talks following an up-and-down 2021 campaign. While he was one of the more durable players on the roster, his shooting inconsistencies were often the focal point of his play. When the Lakers missed the playoffs, he became the target of criticism.

Many believed that criticism would lead to his being dealt over the offseason, but Westbrook picked up his $47M player option to stay with the Lakers for one more year. That temporarily ended trade speculations, but he’s recently been linked to a deal with the Jazz.

On Tuesday, it was announced that Westbrook had listed his $29.9M Los Angeles home. Obviously, that’s piqued a bit of interest following the offseason rumblings.

Pair that with the fact that the team recently added point guard Patrick Beverley, and no one really knows what to make of Westbrook’s current status with the team.

With the house on the market, fans are wondering what his next move is.

Folks on social media have been quick to react to the new report. Many believe Westbrook is now on his way out of town.

This fan wrote, “That is what happens when you play with Lebron James and don’t make the playoffs, his teammates get the blame and Lebron gets a max extension.”

That is what happens when you play with Lebron James and don’t make the playoffs, his teammates get the blame and Lebron gets a max extension

Another says he’s headed to another NBA organization. “Nah, Russ in Utah/Indiana is going to be insane.”

Nah, Russ in Utah/Indiana is gonna be insane

Some Lakers fans appear to be happy about the recent announcement, hoping that it signals the end of the franchise’s relationship with the guard. “Russ is gone. It’s finally over,” one LA supporter posts.

RUSS IS GONE, ITS FINALLY OVER pic.twitter.com/hN0c98HsW7

We’ll soon see if this news actually relates to a trade or if Westbrook is just looking for another home in the area. Let the speculation begin!