Russell Westbrook Picks Up His Player Option To Stay With Lakers, Posts Video Showing His Excitement 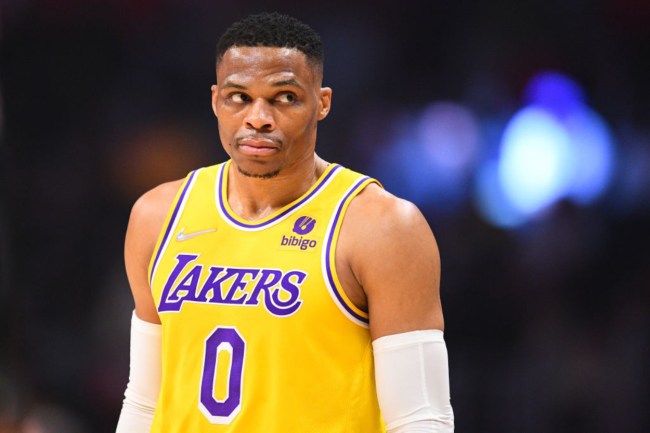 After what was an embarrassing first season in Los Angeles, Russell Westbrook has decided to pick up his $47 million per year player option to remain a Laker for the 2022-23 season.

ESPN Sources: Los Angeles Lakers star Russell Westbrook is planning to exercise his $47.1 million option to return to the franchise for the 2022-2023 season.

While Westbrook could’ve tested the free-agent market starting July 1, the decision to pick up his player option isn’t too surprising. It was highly unlikely Westbrook would have signed a more lucrative deal with a new franchise if he went the free-agent route.

Westbrook seems excited about the fact that he’s returning to the Lakers next season. He shared a video of himself singing in the car shortly before the news of him picking up his option was announced.

The news of Westbrook picking up his player option to stay in L.A. comes just one day after Kyrie Irving elected to do the same to remain a Brooklyn Net. Both Westbrook and Irving were rumored to want out of their current situations, perhaps even get swapped for one another, but that doesn’t seem to be the case.

Both the Nets and Lakers could look to trade the players down the line, but that doesn’t seem to be on the table as of right now.

NBA Fans React To Russell Westbrook Staying With The Lakers

Certainly easier to not have your soul broken when you’re about to get nearly $50 million hahaha https://t.co/vYUkOyKHep

I don't understand basketball, so forgive me, but why WOULDN'T Russ guarantee himself $47 million? Who cares if he hates the Lakers or vice versa https://t.co/S5gETbRP7o

Russ pulling up on the court this year pic.twitter.com/Lt7vhffPOm https://t.co/moAdYASc6k

Russ following Kyrie's path and daring to be different 😤 https://t.co/Ka0BQvNYUU