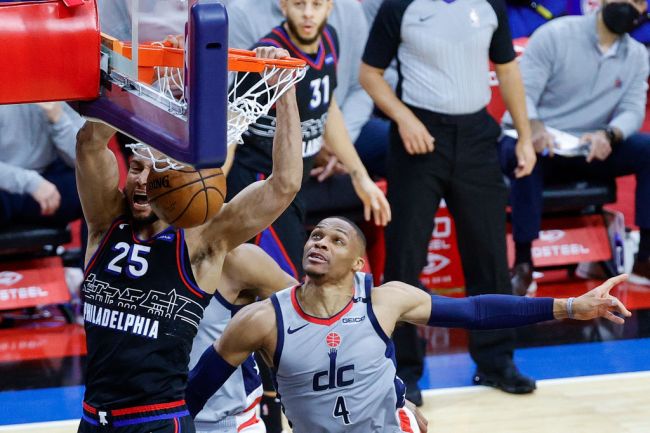 Things got ugly during the fourth quarter of Game Two between the Washington Wizards and Philadelphia 76ers.

In a move reminiscent of Eagles fans throwing batteries at Santa, a Sixers fan dumped popcorn on Russell Westbrook’s head.

In the tunnel, Westbrook appeared understandably enraged. Wizards staff and security guards had to hold Westbrook back.

Here’s the tape of Westbrook having to be held back:

If they let Westbrook go pic.twitter.com/MmQhkcNS5u

The fan was ejected, according to reports. Have to imagine this will be a lifetime ban from the Wells Fargo Center, especially since Westbrook could have been seriously hurt from the incident.

Sixers defeat Washington, 120-95, in Philly. Fan ejected after throwing popcorn on Wizards All Star guard Russell Westbrook (10 points, 11 assists, 6 rebounds), who had to be restrained from going after the fan by security guards and Wizards staff.