Russell Westbrook Gets Heated, Threatens To Beat Up Jazz Fan And His Wife In NSFW Video 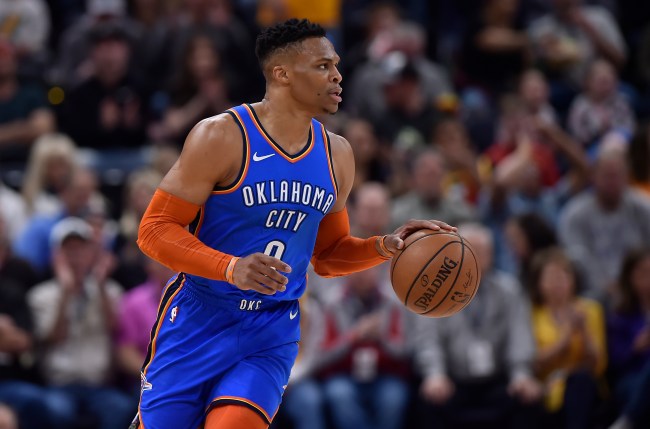 Russell Westbrook might catch some heat from the NBA after his latest altercation with a Jazz fan.

Tonight, an ugly video of Westbrook threatening to beat up a Jazz fan and his wife went viral on Twitter.

During the playoffs Westbrook infamously got heated with several Jazz fans on the sideline last year.

LOL Russell Westbrook snapped on this Jazz fan "back the fuck up" pic.twitter.com/nSD7C0Gwqm

Westbrook would later talk about why he hated Jazz fans so much.

Russell Westbrook blasts Jazz fans for being disrespectful " Here in Utah really vulgar things are said to the players,..I'm tired of letting fans say whatever the hell they want to say because if I'm on the street they wouldn't say that to me because I don't play that shit" pic.twitter.com/isPp6VmUof

We’re not sure what the Jazz fans told Russ tonight but I’m sure he’ll address the situation after the game.

Update: Patrick Patterson revealed what the fan said during the game that set Russ off.

Fans can say shit about a mans family, wife, & kids.. Tell a player “Get down on your knees like your use to.” As men, what do you expect us to do? Shut up & dribble? No one is held accountable for their actions except for us. Fans are protected in every way possible but not us.

The fans were giving a slap on the wrist and allowed to stay in their seats.

Five Utah Jazz fans received "warning cards" that their comments, gestures and/or behaviors directed at players were in violation of the NBA Fan Code of Conduct, but were able to return to their seats after their altercation with Russell Westbrook.