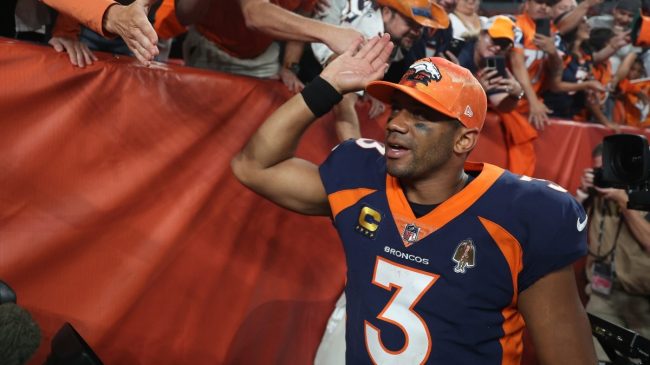 Russell Wilson and cringe just go together like peanut butter and jelly. The Broncos quarterback has received flack over the years for some of his antics. Maybe it’s all an act, or maybe he really is this cringy. Regardless, it appears a Subway commercial featuring Wilson has hit social media and both Twitter and TikTok are trying to delete it altogether. Buckle up for the weirdness.

Ben Cary somehow has the full video available and shared it on Twitter. Prepare yourself, as Russell Wilson is in peak form for this clip. He oddly talks to the camera as if he’s having a conversation with you, which makes it even weirder. Additionally, nothing the Broncos quarterback says is even remotely close to a real conversation.

The original video was deleted from TikTok and Twitter pic.twitter.com/0sfQwb1ZnV

Luckily, TikTok has a feature where people can make videos with existing clips. With that in mind, PFT Commenter of Pardon My Take created a hilarious spoof of Russell Wilson’s weird Subway commercial. Check it out and give yourself a good laugh today.

Is Russell Wilson even human? There is just no way one person is chock full of this much cringe. Perhaps this is all just an act and he’s been pulling out chains this entire time. At least that’s what we’d like to choose to believe. It feels like everything changed when Wilson shared that weird video, calling himself “Mr. Unlimited.”

At the end of the day, Russell Wilson has a sweet life, despite being the cringiest person on the planet. He’s the starting quarterback of the Denver Broncos, he’s won a Super Bowl ring, and he has a beautiful family with Ciara. Although we all enjoy poking fun at him, Wilson is truly winning at life.