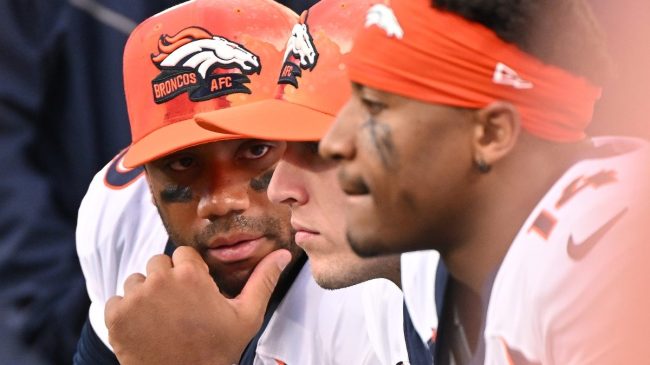 It’s truly been a disappointing season for the Denver Broncos. Many had Super Bowl hopes for this franchise after trading for Russell Wilson. Instead, they’re one of the worst teams in the league as the offense has largely struggled all year. Now, rumors are picking up steam that Wilson is losing the locker room.

Zac Stevens, a team beat reporter, shares Tom Pelissero’s reporting about the Broncos’ rumors that are circulating right now. Apparently, the team still believes in head coach Nathaniel Hackett, despite his numerous coaching blunders. Meanwhile, Russell Wilson, “has lost some people around the team. He has lost some people in the locker room,” per Tom Pelissero.

According to @TomPelissero, Nathaniel Hackett has NOT lost the Broncos locker room, but…

Losing faith in a quarterback is never a good thing. Especially after Denver forked over a fortune to bring Russell Wilson into the facility. Nathaniel Hackett hasn’t been great either. However, it appears the Broncos are losing faith in who they believed to be their franchise quarterback.

Perhaps we should have seen this coming after Mike Purcell ripped into Russell Wilson on the sidelines while the team embarrassingly lost to the Carolina Panthers. At the end of the day, the Broncos must address these quarterback issues, as these rumors could get out of hand quickly.

Keep an eye on this situation. If these rumors are true, then Nathaniel Hackett could make a drastic decision and bench Russell Wilson.