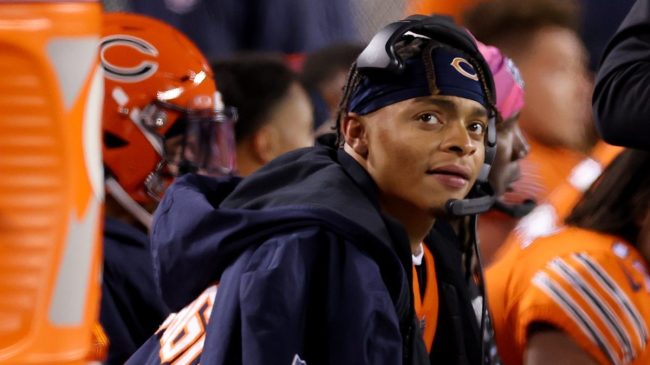 Things have not gone according to plan for either Justin Fields or the Chicago Bears since the team selected him with the 11th overall pick in the 2022 NFL Draft.

Fields began his rookie season on the bench behind veteran Andy Dalton before eventually being handed the starting job. But he struggled in most of his 10 starts. The Ohio State product completed less than 60 percent of his passes for just seven touchdowns and 10 interceptions, posting a 2-8 record along the way.

His second season hasn’t been much better. Through six games the Bears are 2-4. Fields has completed just 54.8 percent of his passes, fewer than a year ago. And he’s thrown for only four touchdowns against five interceptions.

The frustration with the young QB came to a head on Thursday night for former NFL veteran signal-caller Ryan Fitzpatrick. Fields went 14-of-27 for 190 yards, one touchdown and one interception as the Bears dropped a 12-7 loss to the Washington Commanders.

Fitzpatrick, a Thursday Night Football host for Amazon Prime, did not hold back.

The Bears have done a terrible job of putting talent around Fields. Chicago has little in terms of weapons in the passing game and its offensive line is porous. But Fields has done little to help himself, and now Fitzpatrick says its time for him to figure out his identity as an NFL quarterback.

“Justin Fields needs to look in the mirror and say, ‘What am I?’ You are not Peyton Manning. You’re not Patrick Mahomes. You’re not a pocket passer. You are a Cam Newton-type. You are a guy who is an elite runner of the football” #bears

Fields struggles as a pocket passer rn. Wants him (and CHI coaches) to lean on his ability to make plays out of pocket and favorably compared him to a former MVP https://t.co/emQZD6K3nr

How tf are people taking Ryan Fitzpatrick comparing Fields to Cam Newton as a diss or negative? Y’all are acting like he compared him to a RB, but instead he compared him to an MVP QB with a huge arm an unbelievable ability to run. That’s a compliment. 💯 https://t.co/aBQMispz47

I really hope there is more to the quote from Fritzy, cause this is wack. Did this get said about Josh Allen after his abysmal rookie season when his legs were his only positive? It’s always so easy to say this shit about Black quarterbacks. https://t.co/kYvH7F6fe5

"Cam Newton-Type" "Running Back" are code words white people use whenever they want to discredit black quarterbacks talent https://t.co/1TsbifVNF3

Though Fitzpatrick’s co-host, Richard Sherman, went on to say essentially the same thing that Fitzpatrick had said prior.

Regardless of the reasoning, Fields and the Bears need to get the issues sorted out. He’s now 4-12 through his first 16 games as a starter and it’s not harder to wonder how much leash he’ll get. Chicago could yet be back in the market for a quarterback in the 2023 NFL Draft.