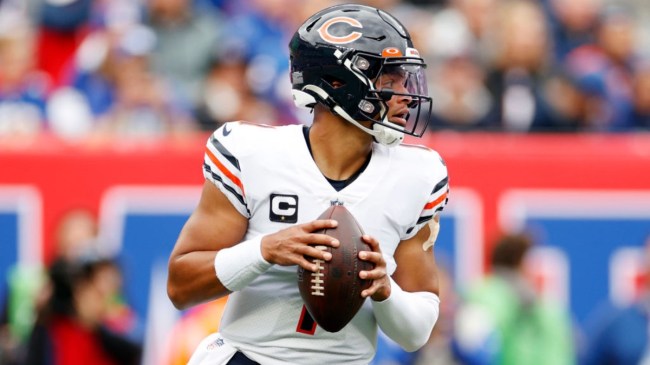 When the Chicago Bears drafted Justin Fields, he was expected to be their long-term answer at quarterback and turn around an offense that had been among the league’s worst. Unfortunately, he hasn’t changed that.

The Bears remain one of the worst offenses in football, scoring the league’s 2nd least points so far this season. They are also averaging the league’s least passing yards per game and are 40 yards worse than any other team in the league in that category.

Despite those rough numbers seeing the 49ers struggle to a 2-2 record, their offensive coordinator refuses to admit that Justin Fields had a rough first month.

By most any stretch, Justin Fields' first 4 games would be considered a struggle.

That's not how Bears OC Luke Getsy sees it, disputing the notion that the quarterback, who is at the bottom of the league in many passing categories, has had a 'rough month.https://t.co/mbpl3UDSNR

There’s a lot about that statement that simply isn’t true. First of all, Fields hasn’t actually gotten better throughout the season. Week 1 was arguably his best performance of the season. 2nd, the Texans aren’t a good team and Fields still completed less than half of his passes and threw 2 interceptions.

The important thing is that we stay focused, keep our eyes on that progress or on that process and we make sure we get better each and every week and I believe that we’re in that phase.

This is really all the Bears can do at this point. They have to hope that there is some moment where everything clicks for Fields as he just hasn’t been the guy they expected so far in his career.

If he doesn’t figure it out, it’ll be a long year for the Bears offense.