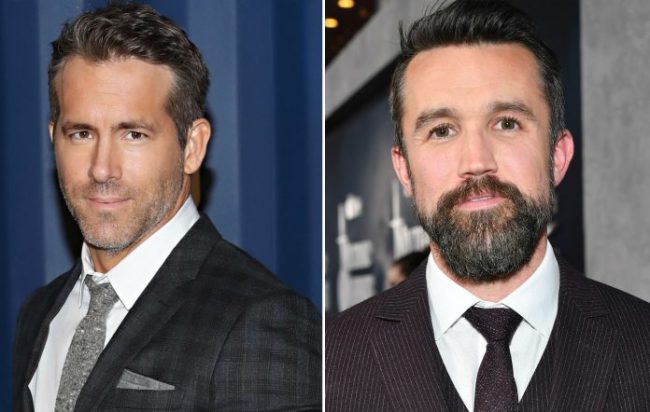 Ryan Reynolds and Rob McElhenney are threatening legal action against Apple TV+ over a joke about their ownership of a Welsh soccer team. Kind of.

The actor duo purchased Wrexham FC, the third oldest soccer team in the world late last year. While the club is set to be the subject of an FX docuseries, it was not supposed to make its television debut this year.

And yet, in the latest ‘Rainbow’ episode of Ted Lasso on Apple TV+, Wrexham FC was front and center. Higgins, the director of communications in the show, quipped that he “can’t tell if [the duo] buying the club is a joke or not.”

In response, Reynolds and McElhenney wrote Apple TV+ in a joint letter demanding a cease and desist. They also took the opportunity to promote McElhenney’s show Mythic Quest, which also streams on Apple TV+.

The letter clearly states that the two will pursue legal action against the streaming platform unless its programming stops “casting any doubt regarding [McElhenny and Reynolds’] commitment to the club, the fans and the entire Wrexham community.

To avoid legal action, the actors demanded “2 large boxes of Ted Lasso’s biscuits” be sent to the club ahead of the season kickoff this weekend.

You left us no choice @AppleTVPlus @TedLasso pic.twitter.com/KSQ3ZswRAL

“Thank you so much for your reasonable arbitration request, Rob. Our team of 2,000 lawyers are furiously baking as we speak…”

Reynolds also posted the letter from his social media and received a quick response from the platform, agreeing to the settlement and avoiding court.

We like our high-profile celebrity arbitration just like Roy Kent: hard packaging on the outside, but soft goodness on the inside. Biscuits are on their way.

Good thing Apple TV+ folded, because things might have gotten messy between the two sides of the soccer shows. Bring on the biscuits!